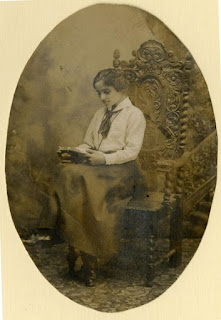 I recently discovered a number of photos of Matilda Rabinowitz (aka Matilda Robbins) at the Walter Reuther Labor Library at Wayne State University, posted last year by an “eclemens.” Matilda was a labor organizer for the Industrial Workers of the World who played a key leadership role, along with Helen Schloss, in the Little Falls Textile Strike of 1912. Those unfamiliar with that struggle of the largely women workers of a century ago can see The Red Sweater Girls of 1912 or my novel based on the strike, The Red Nurse. The novel includes a chapter from Matilda's unpublished memoir shared with me by her granddaughter, Robbin Legere Henderson. 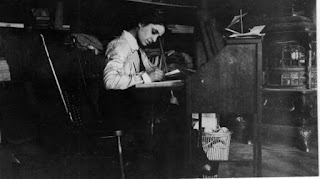 One of the photos at the Reuther library shows Matilda at work during the Little Falls strike, probably in the old Sokol Hall on Flint Avenue which served as the strike headquarters. 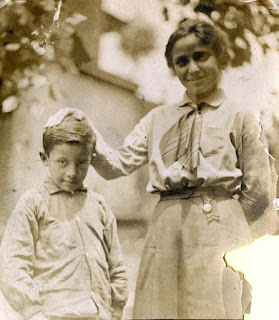 Another photo shows Matilda with her younger brother Herman, possibly in their hometown of Bridgeport Connecticut. 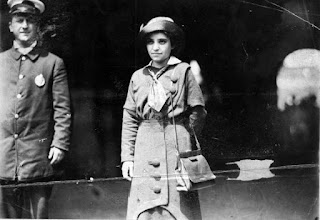 Here is Matilda after being arrested for strike activities in Detroit, perhaps at the Studebaker or Ford plants. 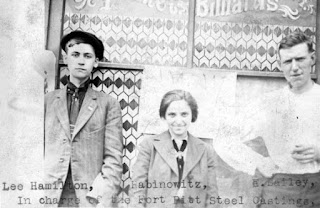 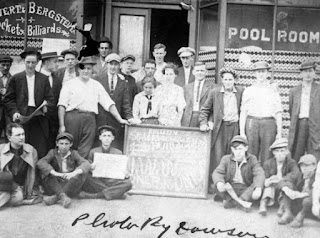 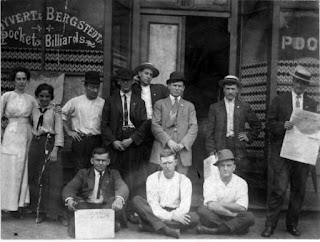 These photos show Matilda with strikers from the Fort Pitt Steel Casings Co. in McKeesport, Pennsylvania. 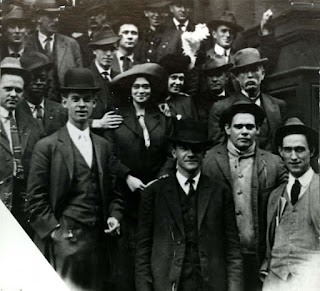 A group portrait of participants in the 1913 IWW convention in Chicago shows Matilda, the woman on the right.


The Reuther site has this note on Matilda in a 2015 article, also by "eclemens," entitled “On The Women of the Industrial Workers of the World.”

The poet, feminist, and activist Matilda (Rabinowitz) Robbins was an early organizer and a lifelong advocate and writer for the One Big Union. She first became involved with the I.W.W. during the Lawrence Strike as a volunteer, and later proved her mettle during the Little Falls Textile Strike where she became the central strike organizer after the other organizers were jailed. For 14 weeks she ran the strike office, organized the daily picket lines and strike kitchen, arranged for legal aid for the jailed workers, and recruited support, with the help of fellow I.W.W. member Helen Schloss. For three years following she traveled the country, organizing textile workers in the East and autoworkers in Detroit, where she was jailed for her activities.

The Matilda Robbins Papers, contain personal writings, photographs, and clippings and are a tremendous resource toward understanding the philosophies of an early women’s rights activist.

The IWW – which still exists today – has this description of Matilda in a piece on IWW women  by Autumn Gonzalez, Nicholas DeFilippis and Donal Fallon:

As a young woman, Matilda Rabinowitz traveled the country with the IWW supporting organizing drives and striking workers. She may be best known for her participation in the Little Falls textile strike of 1912, where she was able to gain the trust and confidence of a diverse group of mainly immigrant workers, rebuild the organizing committee, and reform a completely female strike and picket line. While the long battle with the mill in upstate New York dragged along, Rabinowitz organized for the children of strikers to be housed by IWW-sympathetic families in neighboring communities, which prompted further community support for the mostly-female strikers. She also lead a legal defense fund for arrested strikers, going on a months long speaking tour for those who were arrested in the battle at the mill, raising money and awareness for the effort. Her leadership was key in the strike’s successful conclusion.

Rabinowitz wound her way  from upstate New York to Michigan, where her soapbox speeches began drawing lunchtime crowds of 3,000 at a Ford plant, causing Ford officials to abolish lunch privileges. Ford also had Rabinowitz and four other IWW organizers arrested for their activities, but the damage was done, and autoworkers in the area took the IWW messages to heart. Workers at a nearby Studebaker plant began organizing and calling for the eight-hour day and weekly paychecks—rather than the bi-monthly paychecks that they were receiving—held a combined skilled and unskilled walkout on June 17, 1913. This action, considered to be the first major strike at a U.S. auto plant,  not have occurred without Rabinowitz’s work. The fire spread to a nearby Packard plant, where workers were attacked by police, but in the end concessions were won on the paycheck issue, although the eight-hour day would wait. The IWW would not gain a foothold in the auto industry, but it proved to the union movement that both skilled and unskilled workers in one industry could work together in one union to fight the boss.

Posted by Michael Cooney at 5:53 PM