How The Other Half Lives at Little Falls, 1912

New York World 1912
[ I only recently found this article published in The New World during the summer of 1912. Helen evidently wrote this before the strike ,after having worked five months as the tuberculois nurse, hired by the Fortnightly Club. I am not sure about all of the locations she describes but include a few recent photos of the general area about which she wrote. Helen's well-founded outrage at local conditions lends credence to  my view of her role in the great textile strike, i.e. that it might well not have occurred as it did, or in Little Falls, without her active presence in town at the time.  - MC] 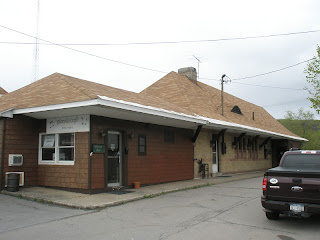 Let me tell you something about how the other half lives at Little Falls.
As the train rolls into the Little Falls station, one is confronted with a huge mill which foams and bustles all night. On the north side of the mill, crossing the railroad track is a street, with a car line running through it,  inhabited by foreigners, perhaps a little better than the streets and houses of the extreme south side of the town, where the slums are quite as bad as any in New York City. Social investigation, interest in “the other half,” was unknown prior to the tuberculosis exhibit that stirred the complacent people from their lethargy, and a club of well-meaning good ladies raised money and hired a visiting tuberculosis nurse. 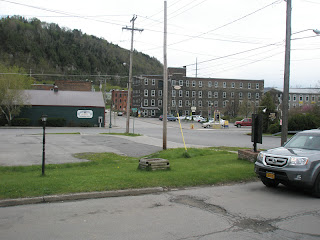 
The people on the south side are mill or factory hands, Italians, Poles, Slavs and Hungarian. Each nationality thinks that his particular creed and country is better than any other. They clan together, and one will find twenty-five or thirty living in one house. One room accommodates from five to ten people, and often as many as fifteen. The people working at night occupy the same beds as the people who work in the daytime; consequently the rooms are never aired. The landlord or agent who comes for the rent knows of this congestion, but when approached by the nurse on the subject the only answer is that those foreigners will crowd in, and nothing could be done with them.  If “those foreigners” did not crowd in one house as they do, it would be impossible for the factories to employ such cheap labor. The price for a sleeping bunk, with use of the kitchen is 3 dol. a month. The tenant gets nothing for his 3 dol. but just a place to throw his weary body upon. He never gets a bath nor any privacy where he or she may wash decently. In my rounds of visits I used to see weary men lying on the beds with their work clothes, as dirty as when they came from the mills. 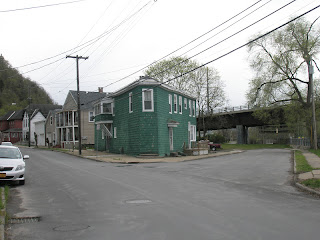 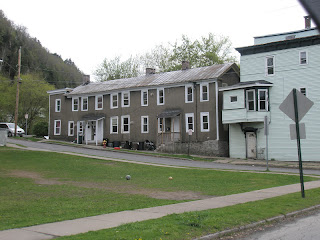 Housing from 1912 era on the South Side of Little Falls


The cost of food is high, and there is no Board of Health to look after its purity. A short time ago there were about 50 cases of ptomaine poisoning from cheese.


Toilets are built in cellars, without ventilation and inadequate sewerage, and there are many open vaults- which is against the law. One row of house is on a creek, into which is discharged all the waste of the mills and all the sewerage of the town. In these houses the toilets are built over the creek.
When asked why they live in such filthy places, their answer is “No understand.”

Tuberculosis is very prevalent and the second-largest death rate in the state is here, the statistics show. It was not until very recently that the health officer took up the matter of fumigating houses; but these houses are so old that it would be impossible to kill the germs.

There are old houses along the Barge Canal which are absolutely uninhabitable, but which rent for about 10 dol. a month. The ceilings leak, the sharp wind blows through the cracks, the floors are broken, and only one or two rooms can be occupied. The landlord owns a textile mill, and also makes fleece-lined gloves, the work being done in some of the worst tenements. Not long ago there was scarlet fever in one of these tenements. The gloves were not allowed to leave the house until the quarantine was off, but they should have been destroyed instead. The woman took care of her husband suffering from scarlet fever, and sewed gloves in the room between. She did not even know how to wash her hands after attending the patient. 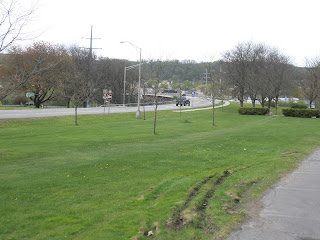 
This tenement was formerly a Methodist church. There were many deaths from tuberculosis in it; during the five months of my stay at Little Falls the nurse discovered three cases of tuberculosis.
The bedrooms in some of these tenements are mere boxes, unventilated, and so dark they have to burn a lamp night and day. There are three-storey and four-storey tenement houses without fire-escapes. Life is cheap in Little Falls. Apparently there is not enough Christianity and humanity in Little Falls to support a philanthropic movement.

[Although Helen makes no mention in the above article  of the large building and gymnasium that stood here, it became a few months later the command center for the strikers and the IWW and Socialist activists who came to Little Falls in their support.] 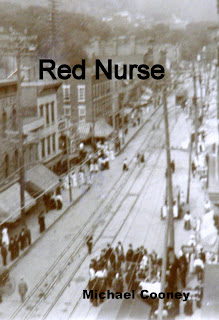 On Kindle and in paperback
Posted by Michael Cooney at 11:11 AM 1 comment:

Little Falls native Michael Cooney will discuss his book “The Red Nurse” at the Tuesday April 24 meeting of the Little Falls HistoricalSociety. Cooney’s book is a timely work of historical fiction centered on the role of public health nurse Helen Schloss in the months before and during the 1912 Little Falls Textile Strike.


The book also contains an excerpt from the unpublished memoir of Madilda Rabinowitz who came to Little Falls as a member of the IWW labor union to help coordinate the efforts of striking mill workers.


Cooney’s presentation is the first in a series of local events to take place between April and October as the city commemorates the centennial of the historic labor strike. Other strike-related events being planned are an August  roundtable discussion at Canal Place, a July presentation by local resident Bob Albrecht at the MVCA and an October living history day.


Contacted about his upcoming lecture, Cooney said:  “One of the most fascinating things about the 1912 Textile Strike is how controversial many of these issues still are today. A hundred years ago both the nation and Little Falls were struggling with a flood of immigration and as the poorly paid factory workers went on strike, many residents of Little Falls were alarmed.”


2012 is the 100th anniversary of the three-month long strike that drew national attention to the city. Cooney also said:  “As the strike wore on, both sides played to the media of the day and when it was over, the results probably did not make anyone happy. This may be why the strike was forgotten for so many years.”


The 1912 Textile Strike contained elements of a number of issues competing for attention in turn-of-the-century America. The broader issues of worker and women’s rights, the relationship between factory owners and workers and the nature of government and public response to labor issues all played out on the streets of Little Falls during the strike.


Taking place in the year following the tragic 1911 Triangle fire in NYC and sandwiched between bigger labor strikes in Lawrence, Massachusetts and Paterson, New Jersey, the 1912 Little Falls Textile Strike drew the attention of both the AFL and the IWW labor unions.


Copies of Cooney’s 117-page “The Red Nurse” will be available for sale for $10  following the meeting. The author’s presentation will be preceded by a short Historical Society business meeting.


The general public is cordially invited to attend this and all meetings of the Little Falls Historical Society. 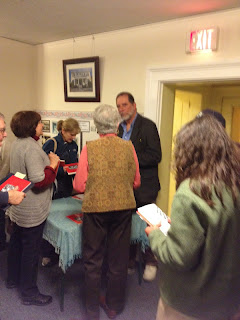 Thanks to all for turning out on Tuesday and for waiting so patiently to have your copy of "The Red Nurse" signed. Barbara and I will be in Little Falls again during Canal Days and participating in panel discussion on the 1912 strike on August 9 along with Dick Buckley, Bob Albrecht, Dennis Dineen and Schuyler Van Horn.  Time and place to be announced .Further recognition of the strike is planned for the weekend of October  5-7, the anniversary of the walk-out.


A walking tour of the scenes of the 1912 strike is scheduled for October 6 and promises to be quite interesting.  A Readers Theater production of “Strike Story,” an original production by Angela Harris about the 1912 strike will be held in the Black Box Theater in the Stone Mill on the following evening, October 7.  And on September 8, 7 PM in the  Masonic Temple, Bob Albrecht will reprise his talk on the life of Helen Schloss, the protagonist of my novel. Bob, however, will confine himself to a purely factual approach.

Monitor the Historical Society website for more details in coming months.
Posted by Michael Cooney at 12:04 PM No comments: