The Hannacroix and Lewis A. Swyer Preserves: Wetlands, a Waterfall and an Old Paper Mill

Recent hikes along the Hudson south of Albany....﻿ 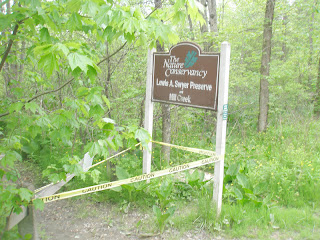 The Lewis A. Swyer Preserve consists of a freshwater tidal marsh along Mill Creek onthe east shore of the river. The trailhead  is on Route 9J between Schodack Landing and Stuyvesant.  A half-mile long boardwalk across the marsh has been seriously damaged by recent floods and is officially closed.  River access is blocked by the Amtrak line.

The preserve was chosen as a  project of the Nature Conservancy because of the unusual marsh environment:


A freshwater tidal swamp is formed only rarely, requiring a river bed close to sea level for a long distance from the mouth of the river. At the Lewis A. Swyer Preserve, 120 miles up the Hudson River, the daily tides change the fresh water level in Mill Creek by more than four feet. Frequent flooding of the adjacent flat land has created the freshwater tidal swamp that is one of only five in New York State. 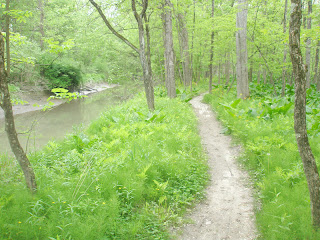 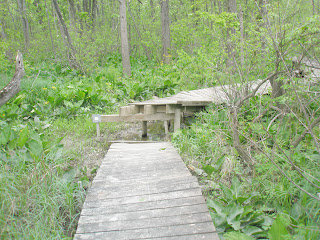 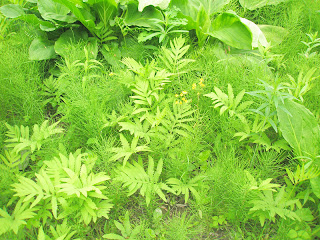 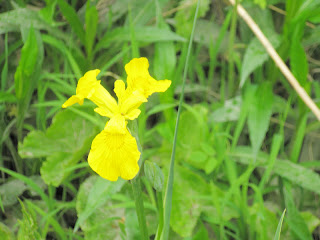 
The Hannacroix Preserve consists of 120 acres along Route 144  north of the beautiful village of New Baltimore on the river's west bank.  This area is a project of the Open Space Institute in collaboration with the New Baltimore Conservancy and described on the OSI site as “an undeveloped and wooded landscape with a half-mile frontage on Hannacroix Creek, a DEC trout stream.”

Two trails lead from a parking area just below the Albany-Greene county line. The Hudson River Interpretive Trail crosses back over route 144 and goes about a mile to wetlands bordering the river.
The LaVern Irving Trail is a little longer and goes uphill from the parking area , then follows Hannacroix Creek to the waterfall and the ruins of a 19th century paper mill 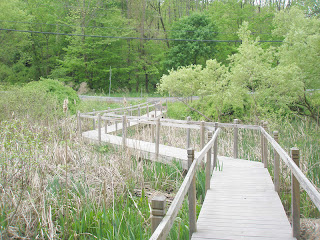 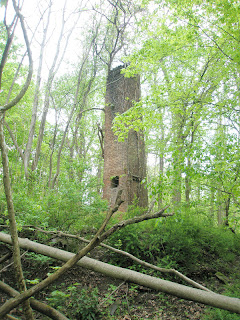 Ruins of an old ice house 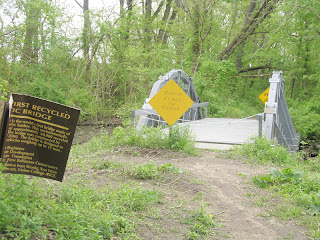 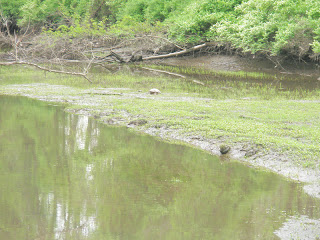 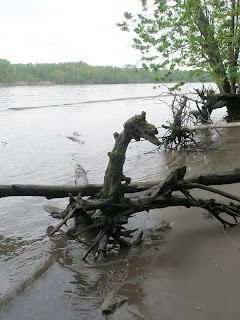 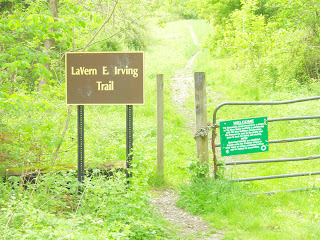 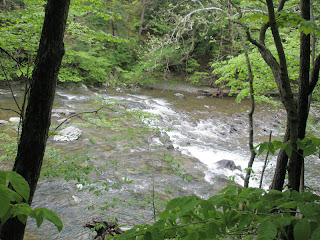 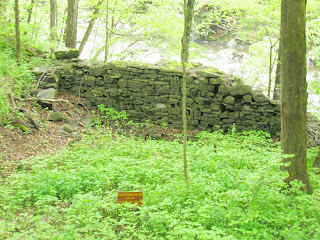 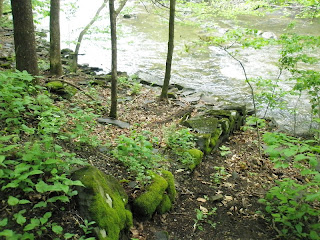 The foundations of  the Croswell-Bowen water powered mill which operated from 1826-1897. It was first used as a saw and grist mill by Nathaniel Bruce, and later operated by James Croswell and Stephen Parsons. Burned three times and rebuilt twice, the mill specialized in converting straw pulp into rough wrapping paper. 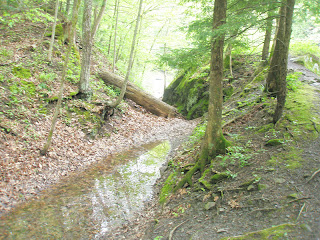 This mill race carried water from above Hannacroix Falls to power the mill. In the 19th century a timber dam created a mill pond behind the falls. 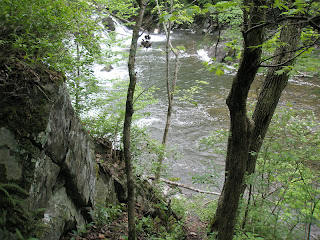 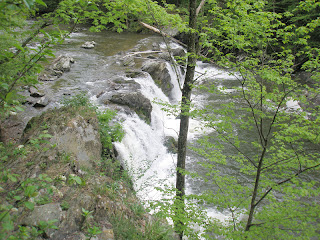 Views of Hannacroix Falls from near the mill

Posted by Michael Cooney at 4:32 PM No comments:

Harvey Mountain and the Tale of the Lost Gold Mine 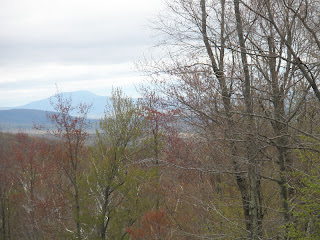 The Harvey Mountain State Forest  in Austerlitz, NY, was created in 1999 through a purchase from the Millay Society, and  lies along the Taconic Ridge on the New York-Massachusetts line near Steepletop, the country home of the poet Edna St. Vincent Millay.
The 2065 foot  summit of Harvey Mountain, easily accessible by a 1.5 mile trail from East Hill Road off route 22, affords beautiful views of the Green Mountains to the north and the Catskill Mountains to the west. But this woodland was once far more populous and the scene of considerable commercial activity. And one particularly notorious murder.
The connecting trail from East Hill Road,  reaches the main trail from the fire tower on  Beebe Hill, 4.5 miles to the west, which then continues through gradually ascending forest. 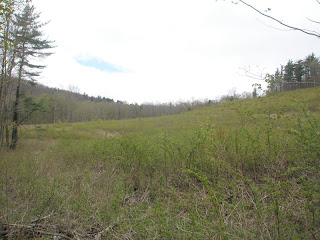 Walking eastward, an open meadow is to your right and stone walls  can be seen marking old roads and enclosures, clear indications that this now forested  area was once heavily farmed. 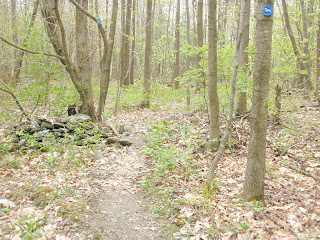 The trail passes through gaps in old stone walls

Such walls – for those unfamiliar with them – go back to early New England farmers and are at least 150 years old. 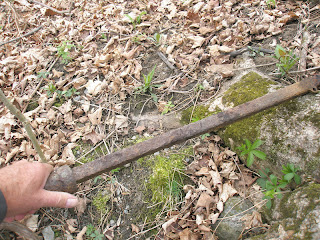 Mine, quarry or charcoal pit?
After about ¾ mile, a mine or possibly charcoal pit can be seen.  This seems to have been a fairly small operation and may not be related to what was once a major bridge across a ravine.  Why such a strong bridge abutment was needed is unclear but it seems that fairly heavy loads must have been anticipated, perhaps lumber or ore. 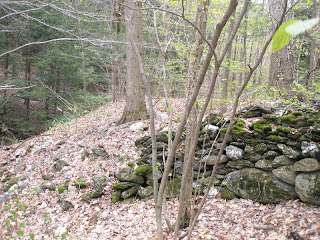 Foundation for a bridge over a steep ravine
After the trail crosses the stream near the old bridge site, the grade gradually increases. 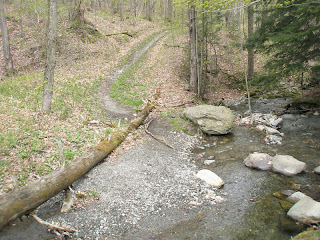 The stream can easily be crossed on stepping stones

Stone walls can still be seen, but it is hard to believe any farming could occur on such slopes. Perhaps these walls mark old pastures more than cultivated fields. 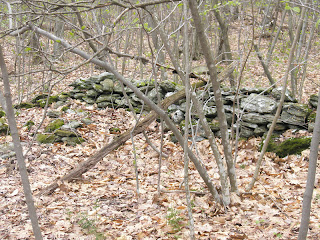 Views from the summit are ample reward for an hour’s climb.  And it appears that a roadway from the north offers another way to access the summit. (Although ATVs are prohibited in the state forest) 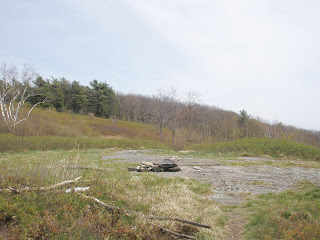 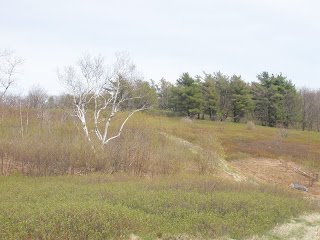 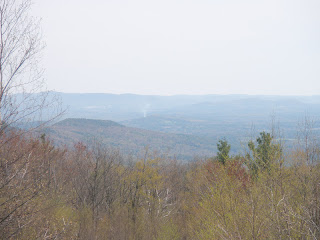 This remarkably peaceful country, however, was the scene of a murder that attracted national and international attention in the 1880s – and which raises the intriguing possibility of a secret gold mine in these hills. 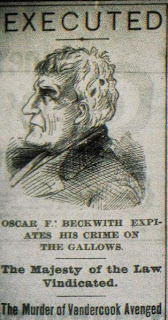 On January 10, 1882 Simon Vandercook went to the shanty of 71 year old Oscar Beckwith, who had recently returned to these hills from years of wandering and prospecting in the West.  Although the various newspaper reports of the time differ somewhat, it does seem clear that the two men were partners in a gold mine company. According to Nick Bigg, who wrote a 2003 article for the Columbia County History and Heritage magazine, Beckwith believed there was gold on land he owned in this forest. He sold the land to a newly formed corporation in return for a third interest, while Vandercook became manager of mining operations. 1900 tons of rock were mined and carried out by wagon to the Chatham rail station, where they were sent out for assay. The ore was reportedly not rich enough to justify mining, thereby rendering Beckwith’s stock worthless – and Vandercook proceeded to sell off timber on the land and to pocket the proceeds. Then came the murder.

When Vandercook failed to come back from his morning visit, his landlord Harrison Calkins came  up from Alford, on the  Massachusetts side, inquiring and thought he smelled burning flesh. When old Oscar disappeared that night, neighbors broke into his cabin and found Vandercook’s remains, minus a hand, two feet and a head. Although cannibalism was not mentioned in the initial newspaper account in the Hudson Evening Register of January 13, the legend of “the Austerlitz Cannibal” soon became part of local folklore.
Amazingly, Beckwith remained free for three years and was finally arrested in 1885 some 200 miles north of Toronto. How a man of his age and apparent poverty managed what the newspapers reported as a flight across the continent and back is not clear. Nor is the role of a mysterious figure identified in reports of the time as the detective J.P. Gildersleeve of Kinderhook who is said to have pursued Beckwith. (What could have motivated this Gildersleeve or who would have paid for such a lengthy pursuit is not clear. Could gold have somehow been the driving force for both men?)
Identical descriptions of  the detective’s success  appeared in the Long Island Star and other papers when Beckwith was apprehended:
Bracebridge, Ont. February 25, 1885: Detective J.P. Gildersleeve, of Kinderhook, Columbia county, N.Y., went to work on the case and followed the criminal to the Pacific ocean, and thence through Canada along the Canadian Pacific railway. He put himself in communication with Detective Rodgers, of Barrie, and D.F. McDonald, a government woodranger, and these, with the assistance of Chief Constable Perkins, of Gravenhurst, accompanied by Detective Gildersleeve and Sherif Hamor, of Columbia county, N.Y., succeeded in arresting the murderer Beckwith at South River, in the district of Parry Sound. The party passed through here with the murderer, en route to Toronto.
The conviction of Beckwith was no easy matter for prosecutors in Hudson. According to Biggs’ article, the records of the first trial  and appeals are missing, possibly destroyed in the 1907 fire at the Columbia County Courthouse.  A new witness testified during the motion hearings for a second trial: a Dr. Giles S. Hulett of Great Barrington said that Vandercook and his landlord had spoken of “getting rid of Beckwith” as an obstacle to their mining plans.  Beckwith himself testified that he only killed Vandercook in self-defense after the man attacked him.
The transcripts of the second trial are also incomplete and no record has been found of defense testimony. Beckwith was again convicted and again sentenced to death. A sanity hearing reported some delusional thinking but he was ruled sane enough to be executed.  On March 1, 1888 he was finally hung in Hudson, reportedly the last public execution in New York state. 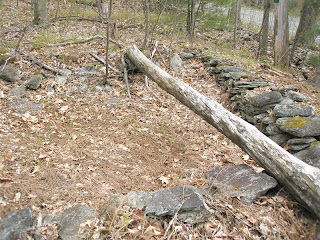 Could this have been Oscar Beckwith's cabin?
And now, amid the state forest lands where mines and farms once flourished, a hiker may come upon an old stone foundation here and there, and wonder if this is the place where Simon Vandercook was struck down.
And the same hiker may wonder if there is any truth at all to the secret of a lost goldmine that old Oscar Beckwith took with him to the grave:
While awaiting the sentence to be carried out, he told some of his visitors about the discovery of a new gold vein, much richer than the first, which he discovered just before he eliminated his partner. No coaxing would get him to reveal the location of the new site, for he hoped the governor of New York would commute his sentence. 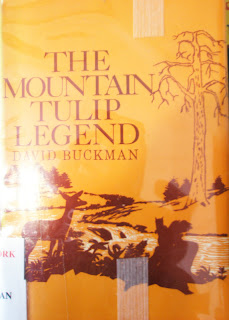 This 1962 historical novel by David Buckman was inspired the Beckwith case, but names and details have been changed. Even so, it offers an interesting imaginative look at life in the Taconic Hills in the 1880s. The book is long out of print but there is a reference copy at the Roeliff-Jansen Library in Hillsdale.
Posted by Michael Cooney at 11:20 PM No comments: