A letter from Vladivostok, 1919 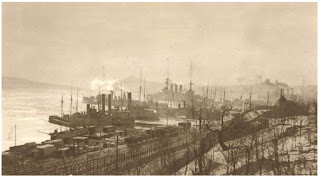 The port of Vladivostok in 1919

Some years ago a friend who worked as a plumber in New York City found a letter, written in French, in an abandoned apartment building and passed it on to me. Although my French is not good and the nearly hundred year old letter was not completely legible, it was apparent that the writer was one of the Allied soldiers sent to Russia in 1918-19 to suppress the new Bolshevik government then struggling to extend its control over the entirety of the Tsar’s old empire. As the Reds won the Russian heartland, the White Army under Admiral Kolchak was driven into Siberia, making Vladivostok its main port for access to whatever aid the capitalist powers chose to provide to the counter-revolutionary forces. Kolchak was eventually betrayed and the Allies were evacuated.
In many ways that failed expedition of a century ago foreshadowed the unsuccessful counter-insurgencies waged to this day by the US and its allies. The unknown soldier knows that the effort which has cost so many lives is pointless. He longs only to go home to his family. It seems probable that his goal was to return to France although Canadian soldiers were also at Vladivostok in 1918-1919. There is no way of knowing if  the soldier ever returned home or how the letter to his family ended up in New York.

The letter inspired the Vladivostok scenes found in my novel, Mr. Dolge’s Money 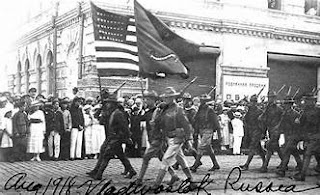 US troops arriving in Vladivostok August 1918 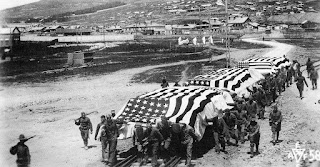 US dead being brought out of Siberia 1919

Here is the translation:

At a Russian barracks called The Riviera near Vladivostok
March 19, 1919

It is finally ….to give you my news in a certain fashion… As I said in my letter of February, the (Name of boat – Tomax?) is already at the dock.

This embarkation is going to happen immediately.
There was nothing yesterday but then all our baggage and our gear….
to the Riviera and…a train.. will carry us there in an hour. I have had a pleasant surprise!

The immense barracks lie in a valley with stations and diverse stores. The …who dominate the seaside and the bay… in the village can all be found within twelve kilometers

I have no fear of finding barracks life... I would say it is perfect but… I have the feeling that we are at the beginning of a (constitutional?) drive…important militarily and internationally.
It is a true novel but an actual situation and the Allied organization (blurred) ! Something in our newspapers does not give good sense here
and the need will be there
the need is great for a unique order and …I believe by the Japanese!
The Americans are content to do business. (Business is business.)
And we…. too much of the world.
The French are near us in Omsk and same plus less or organize a badly defined front on the coast of the Aral Sea.
They are all more active than the British who are not as bad as the Canadians.
The town presents a curious aspect with the (Tajiks?), the Italians, the free Russians…
I find these races almost as curious as the Japanese and the Chinese.

The police are assured by the international detachment and all is calm.
Up to fifty kilometers from the city.
The cannon (or trucks) of the Allied fleet inspire great respect.
In this fashion all regard them as watch dogs (literally earthenware dogs)
and regret the trading of one for the other…

The population appears to be majority Bolshevik but not able to say because the Allies provide them with food and without them, they will be in a famine.
Life is made very simple for the Europeans and Americans who have a beneficial exchange rate.
The ruble goes at this moment …eleven… one hundred fifty francs is worth more than 300 rubles.
We are rich gentleman in this court here…and the high life is for us very cheap.
Diverse rumors circulate and are all about the situation in general.
In all cases elementary precautions border on preventing an attack on the city but not far….
Near Karbine but further than Omsk(?)
The security of the railroad is confronted by small detachments that get on the train in a hunt for loot.
Those people disperse when they pass through (blurry)
they arrive and wait for rear attacks on the food or the munitions trains.
Because of this it is necessary to escort them all.
The travel service is organized almost all the way to Karbine but not quite that far.
The scheduling is irregular and …..
The biggest job of the soldiers who preceded us is to protect these trains and their passengers.
Others drive the trucks and the autos that come from America.
I ignore in this fashion absolutely that which lies ahead…stay here for now at first.
Here it may not be interesting but it is peaceful…
To go to Vladivostok or depart from Omsk but again it is necessary to arrive in order to leave for France.
If I am here, there are two routes, the Orient Express to Marseilles and the return via San Francisco, going backwards.
If I am in Omsk the return will be via the Black Sea and the Mediterranean after leaving from Odessa.
One way or another, it will take me at least 45 to 50 days and it is impossible for me to foresee where or when from here.

In any case, don’t worry about me.
The temperature is that of a normal winter at home.
Yesterday there was a little snow but today the weather is clear and dry.
Good food.
Good lodging.
Heat and warm clothes.
I am able to await the return with patience.

I hope this letter finds you all in good health, Papa, Mama (or Emma?), Emmanuelle, Lea, and the little ones. In any case, I send to you all my greatest affection and despite the distance, the greatest kisses from your son and brother. 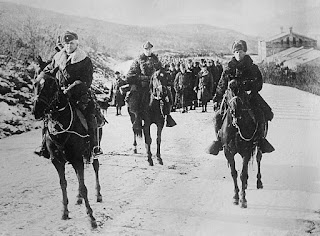 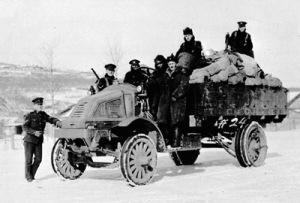 Canadian troops near Vladivostok
Posted by Michael Cooney at 3:56 PM No comments: