Crime in Austerlitz and a Death in Colonie 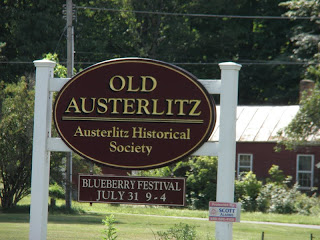 Austerlitz is known for its annual Blueberry Festival
and as the home of Edna St. Vincent Millay
People in the bucolic hamlets and villages of Columbia and Berkshire Counties learned last week that“a rolling drug factory” had been busted by police in Austerlitz, a region of second homes and organic farms only a few miles from Tanglewood, Jacobs Pillow  and other cultural attractions. The operation to manufacture  methamphetamine (lab reports are ongoing) had been set up in a family campground in a township where any kind of crime is almost non-existent.  And a young man linked to the drug lab, Agostino Jubrey, was killed in a gun battle with the police outside his home in Colonie.


As I pieced together the first reports on this incident, it occurred to me that the drug-makers had been quickly identified and stopped due to alert local people who did not hesitate to notify authorities of suspicious activities. However, after talking with many people in the area, I am not so sure it was that simple. 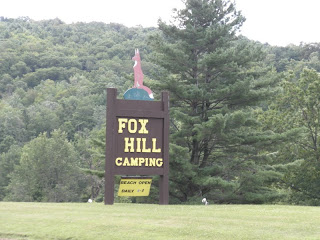 People at the Fox Hill Campground were unwilling to say anything for the record about an incident that can only bring bad publicity to a very attractive family-oriented site. However, chats with a few campers made it clear that the drug gang would certainly stand out in this location – yet no one reported anything until someone called in a report of Jubrey driving “erratically” on the day he died.  It is not clear yet if he was already making drugs in the tents, but the smell of the chemicals should have raised a red flag. 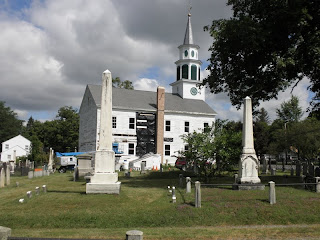 St. Peter's Presbyterian Church in Spencertown was built in 1771
and is undergoing repair thanks to local fund-raising

When I visited Spencertown, the nearest village of any size,  I found a surprising lack of knowledge of the drug lab bust a few days earlier. Some people in the village with whom I spoke had never heard of the incident and others knew only what they saw on WNYT. ( I tend to think that when the hardy  Massachusetts folk  first came over the Taconic Mountains to settle here in 1760, they were a lot more aware of everything everybody was doing.) 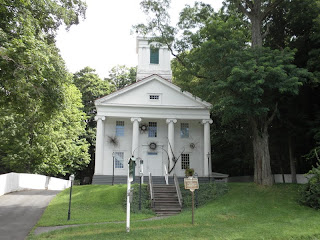 Spencertown Academy, now an art center, was built in 1847
as a institute to train teachers


Instead ofa land filled with the aroused  yeomanry of my imagination, this part of upstate may be singularly vulnerable to criminal drug labs of the kind  busted on July 14 in Schoharie., A couple, who had apparently learned their trade in Kentucky, returned from that state with all they needed to set up a meth lab in the heart of the village. In that case, officials said that the arrests would not have been possible  "without information provided to them by concerned citizens."
Although neighbors did not detect the drug-making operation operation at the Fox Hill campground, NYSP Senior Investigator Gary Mazzacano described to me how a  tip to police was crucial in the chain reaction of events that  led to young Jubrey's death.


Jubrey, 21, rented two campsites at the far end of the campground, up against the woods,  on Monday July 19 and set up two tents.  On Wednesday July 22 at 4 pm he was apparently driving to the campground in his Plymouth Reliant when he struck a 60 year old motorcyclist at the intersection of Route 9 and Keegan Road in the town of Kinderhook and sped off. This is a busy area near the Hannaford shopping center and he probably feared that he had killed the man, or that someone had noted his license plate. However, no license tag was reported at that time.
Speeding away from the injured motorcyclist, Jubrey evidently drove straight to the campground, about 18 miles to the east, in order to break down the drug-making operation.  There may have been one man already at the site, but the only car at that point was Jubrey’s. He called the other two or three men and told them to come out from Albany and to take the drug equipment and chemicals and dispose of it.


The four men in the second car stopped in Ghent where they put the drug paraphernalia in a dumpster of an apartment building. The owner thereupon called the police to report illegal use of his rented dumpster. The four then continued south on 66 where they were spotted  near Konig Road by a state trooper on regular patrol. According to a Times Union report by Tim O’Brien:


Trooper James Lydon  noticed a strong chemical smell and observed chemicals and paraphernalia associated with making illegal drugs in the car. The four were taken to the Livingston Barracks to be interviewed and were released pending further investigation and laboratory results. 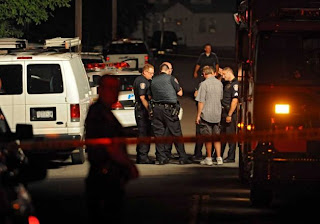 Scene of gun battle between police and Agostino Jubrey,
courtesy Albany Times Union
Apparently, the trooper did not immediately connect the materials from the dumpster with drug-making, nor did the four implicate Jubrey. It was his own highly emotional state that brought him to the attention of authorities and that ultimately led to his death.


When Jubrey returned to his home in Colonie, he became involved in a quarrel with his mother and stepfather and shot his stepfather in the hand.  Meanwhile, however, someone had seen him driving erratically as he left the Fox Hill Campground and called in a car description and plate number.


It was this tip that brought Columbia County Sheriff's Deputy Toby Van Alstyne and Colonie Police Officer David Belles to Jubrey's home just before 7 p.m. to investigate the motorcycle accident. They apparently did not know of the shooting when they arrived . But Jubrey, having already shot his stepfather, was in the family’s driveway and highly agitated:


As police arrived, Jubrey turned and fired two shots at the deputy's car. One bullet lodged in front of the driver's side door.


Belles exited his car, assumed a firing position and traded gunfire with Jubrey. At the police station Thursday, investigators showed off Jubrey's Plymouth Reliant. Three of its four side windows were shattered, and five bullet holes marked its passenger side. At the passenger front end, a dent and scrapped paint showed where police say Jubrey struck the motorcyclist.


As Belles fired at Jubrey, the sheriff's deputy drove away down Leach Avenue, turned around and exited his vehicle with an assault weapon in hand. By that time, the incident was over and Jubrey was critically wounded.

Posted by Michael Cooney at 3:48 PM No comments: