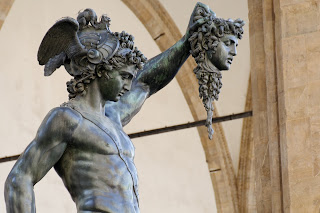 Perseus by Benvenuto Cellini at Florence


Upstate Perseus is a play in four scenes, inspired by the ancient Greek myth of Perseus. A boy is raised by a single mother, grows to manhood and undertakes the dangerous mission of bringing down a possibly mythical beast. Along the way he rescues a beautiful girl named Andromeda from another kind of beast, accidentally kills his father, and returns home to kill, perhaps by accident, a tyrant who has been oppressing his mother.

The Perseus myth has been told and retold for perhaps three thousand years, and has been the subject of sculpture, paintings, drama and film. The popular 2010 movie Clash of The Titans (a remake of the 1981 film with the same title) draws on the same tales, as does the popular young adult series of Percy Jackson novels. Euripides and other Greek dramatists tackled the myth in various plays which have not survived.

In other words, it’s a good story worth telling and retelling. My version, written in the summer of 1977, was intended for a theater group that appeared only momentarily in a tent on Limekiln Lake in the Adirondacks, i.e. it was never performed in any serious way. On rereading the old manuscript, it seems worth making it available under a Creative Commons Sharealike license so that any interested groups could perform or draw upon it in any way they wish. There is no cost for downloading the PDF at Lulu.com. 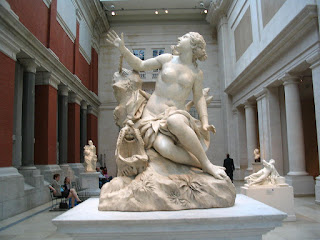 Andromeda by Domenico Guidi
at the Metropolitan Museum of Art, NYC

This version of the ancient myth is set in upstate New York and along the Canadian border and features teenage characters who happen to bear those powerful names, Perseus and Andromeda. There’s an Athena who runs a diner and a Hermes who works as a delivery man. No one rides on Pegasus, though, and Medusa doesn't exactly turn anyone to stone. Otherwise the plot, through a series of remarkable coincidences, recreates the events of an ancient myth in a 1970s setting.

Here is the scene in which Perseus rescues Andromeda from a monster, in this case a human one:

The curtain rises on total darkness. The howling of a wolf can be heard, slowly blending into the the terrified scream of a young woman. The lights come back up on a forest road. A man, is dragging a fiercely resisting young woman off the road into the surrounding forest. Enter Perseus, who pulls Herman’s rifle out of its bag, and runs offstage after the woman and her assailant. The sound of fighting can be heard, a gunshot, and then silence. Perseus re-enters, leading the badly shaken young woman.

PERSEUS: This is the first time I ever tried to shoot somebody. I think I missed him.

ANDROMEDA: I hope you hit him. I hope he goes off somewhere and bleeds to death.

(She sits on a rock, glancing up at Perseus who stands leaning on the rifle.)

I don’t know how to thank you. You saved my life.

PERSEUS: Oh, that’s all right. I had to do what I could.

ANDROMEDA: You saved my life.

PERSEUS: Are you all right, miss? Do you need to go to a hospital?

ANDROMEDA: No, I’m all right. Just let me sit for a minute.

PERSEUS: Shouldn’t we call the police?

ANDROMEDA: No way! That bastard has more money than you or me. We go to the cops and we’d be the ones ending up in jail. (She extends her hand to Perseus.) Uh, I’m Andromeda, by the way.

PERSEUS: No, that’s not it. My name is Perseus.

ANDROMEDA: Perseus? Wow! I guess your parents were really into myths too.

PERSEUS: Yeah, my mother was. But hey, you know the story of Perseus and Andromeda, right? How he came along and rescued her from a monster.

ANDROMEDA: Yeah, this is like the most amazing coincidence ever. I mean, that old man you shot really was a monster.

UPSTATE PERSEUS can be downloaded as a free PDF at the Wilderness Hill Books site.

Posted by Michael Cooney at 10:35 AM No comments: 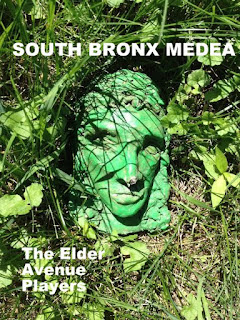 In 1976 the Elder Avenue Playhouse in the Bronx staged a play based on Euripides’ Medea which my classes at the time had been studying. The Playhouse was a very informal company, making use of various spaces in the Soundview neighborhood, then in the early phases of what came to be known as hiphop culture.

The various scenes in South Bronx Medea were acted out by adolescents and included plenty of improvisation. Many years passed and I came across a set of scripts and notes both in my handwriting and in that of a variety of students and fellow teachers. I have put together that fragmentary material in a single new format which is now made available as a free PDF. The script is licensed under a Creative Commons Non-commercial ShakeAlike “copyright.” This means that any person or group is free to make use of the material in a non-commercial manner as long as they acknowledge and link to the license.

Unfortunately, the early versions of some of the scenes has long since vanished, as have the last names of students listed in the notes as Jose, Ernesto, Roland, Jeff, Hector, Papi, Sapo, Maria, Cookie, India, Milagros, Medody and many others. I certainly cannot take all, or even most credit, for the drama which I now offer to the public. Hence the authors are listed as “The Elder Avenue Players” and myself as the editor. 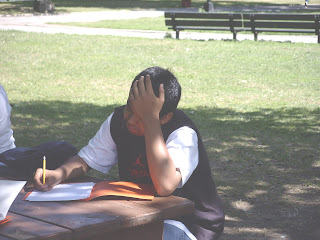 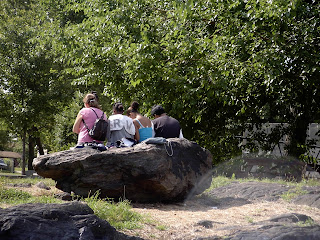 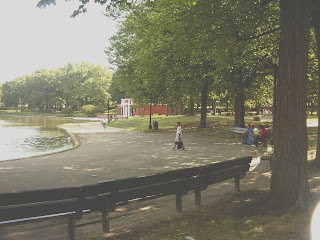 Student writers at Claremont Park in the Bronx

The play closely follows the plot and characterization of Euripides tragedy. Like her namesake, Medea Rodriguez is enraged at Jason, here an NYPD officer, for leaving her and their two sons and marrying a woman who will enhance his career prospects. Her rage builds to a horrifying finale but, as in the original version, Jason continually underestimates the danger she presents to their two small boys.

The entire play takes place in front of a typical five story Bronx walk-up tenement. The three neighborhood women are inspired by the Chorus of Euripides’ tragedy. Ellen is a social worker and Hank is a Special Education teacher; both serve the same role as Medea’s servants in the original drama. Creedon, the Bronx district attorney, is the modern version of Creon, king of Corinth, while Alvarez serves the same function as the king of Athens. 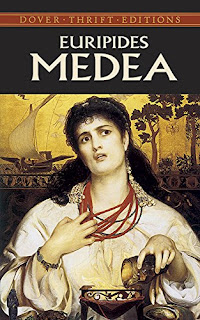 An excerpt from “South Bronx Medea”:


(Suddenly Medea appears on the steps of the building, wildly disheveled. The three women shrink back in fear from her.)

MEDEA: What are you bitches looking at? Go ahead and stare all you want! What do you think, I’m just a crazy Dominicana? I got reasons to be crazy. Ese maldito hijo de puta! He thinks he can leave me! Mierda esa puta blanca flaca!

FIRST WOMAN: You need to calm yourself down, Medea.

SECOND WOMAN: You think you the first woman to ever get ditched by a man?

MEDEA: He wants a young piece of ass so he forgets about me. You saying that’s right?

THIRD WOMAN: You’re making a fool of yourself yelling in the street like this. You want the whole world to know your man doesn’t want you any more?

MEDEA: Who you calling a fool? You the fool for taking shit from men all your life. But not me! I’ll see us all dead before I let him walk over me like I was nothing!

FIRST WOMAN: Don’t talk like that. It ain’t right.

MEDEA: I Pray to God to hear me! God strike us all dead before you let that son of a bitch get away with this!

MEDEA: Don’t I? I know all about killing. I know how to use a knife. I know what poison can do. I can get some gasoline and set a fire as good as that moreno who burned up all those people on Southern Boulevard.

ELLEN: (putting her arms around the boys) Think of your sons, Medea. You have to be there for them.

MEDEA: I am not like some stupid little white bitch who runs to her Daddy. I know how to get even with people who treat me like shit!

SECOND WOMAN: Dominicans always act wild like this when their man leaves them. Later, they calm down.

THIRD WOMAN: Yeah, when they find another man. All Medea needs is a new man.

MEDEA: Cutting his heart out would be too good for him. He needs something to twist up his insides and make him really suffer.

(Medea goes back into the building, muttering to herself.)

FIRST WOMAN: Hey social worker, you think it’s safe to leave her alone upstairs? It’s bad to be alone when you’re in the kind of mood she’s in.

SECOND WOMAN: People get strange ideas when they’re all alone.

THIRD WOMAN: Try to get her to come out again and talk to us. We know her. We understand her.

ELLEN: I’m not so sure I can help right now… She probably just needs time to adjust to her new reality...Wait! She’s coming back.

(Medea comes back out onto the steps.)

MEDEA: You all talking about me? You all got your nose in my business, don’t you?

ELLEN: We are concerned, Medea. We are here for you, Mr. Baum and I and your friends.

MEDEA: You gotta know what I gave up for that maricon. I come from a family that hated cops. When I went with Jason, my mother and my sister told me they never wanted to see me gain. They went back to D.R. and when I called, my mother hung up on me. When I sent pictures of my kids, she ripped them up and sent back the pieces. And now Jason is tired of me. I’m too old and I’m not una mujer rica like that white bitch. Now he pretends we were never anything together. Now he walks out on me so he can screw that little flaca.

FIRST WOMAN: I don’t blame you for hating Jason, Medea, but watch what you say.

SECOND WOMAN: Don’t forget that Jason’s a cop and his new father-in-law is the D.A. They could throw you in jail for making threats.

MEDEA: You think I care? I don’t give a shit what they do! I’ll see their blood dripping all over these two hands. I’ll lick their blood up in the streets.

THIRD WOMAN: Shut up, Medea! Here comes Creedon himself with some cops. Just stay shut, will you?

(The women go off to one side. Ellen stands next to Medea as the district attorney and two patrolmen enter.)


Upcoming: A version of the Perseus myth originally presented by the Limekiln Theater Company in the summer of 1977.


LINK to PDF of South Bronx Medea at Lulu.com
Posted by Michael Cooney at 8:06 AM No comments: