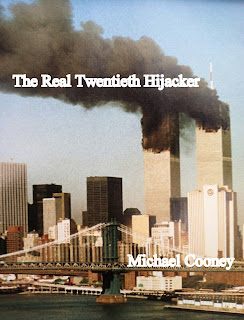 My latest work focuses on a much more recent era in New York's history, the tragic days when our leading city was attacked by fanatics consumed with hatred. On September 11, 2001 nearly three thousand human beings were murdered by four small groups of men.  Three of the attacks were carried out by five man teams and succeeded in causing untold suffering. The fourth consisted of four men and that was the only team that failed. The fact that only one attack failed was due to the bravery of the Flight 93 passengers who fought back but the failure may also have been affected by the absence of a fifth man. By September 12, 2001 investigators were asking: where was the missing terrorist?

In 2003 a Moroccan named Zacarias Moussaoui, who evidently had severe mental problems, was convicted of being that missing twentieth terrorist and sentenced to life in a maximum security prison. He acted as his own lawyer, rambling on incoherently and making little sense before finally offering the confession that earned him a life sentence. At the time, and since, those who have studied the case have expressed serious doubts as to the role Moussaoui played in the events of 9-11.

In "The Real Twentieth Hijacker" I offer an alternative candidate for this dubious role: a young Algerian immigrant, a student at LaGuardia Community College in Queens who is recruited for flight training by a man he meets in a cafe on Steinway Street. This young man, Mohammad Mostaganem, believes he is following the instructions of Osama Bin Laden when he enrolls in a flight school in South Carolina.

But something changes. Something diverts Mohammad from the fatal path he has taken. Not the intervention of the FBI or the CIA. Not a drone attack nor a targeted assassination.

The story is available via Kindle for $.99 and may be read on tablets,smartphones and PCs by downloading the free Kindle app. Amazon Prime members may also borrow the story through the Kindle Owners Lending Library.


Excerpt from "The Twentieth Hijacker"

“Remember that when Allah closes one door, he always opens another.”
“So it has been said.”
“I have learned of a glorious opportunity for the right man.”
“Yes?”
“I have spoken with a messenger who comes from the Sheik. ” Ashrawi’s voice took on a solemn tone. To Mohammad he sounded like a revered scholar reading from the Hadith.
“Peace be upon him!”  They had spoken of the Sheik on many occasions, but always as of a legendary figure, almost as if he were the hidden Imam or Saladin.
“The  Sheik, Osama?” asked Mohammad. “He who led the Mujaheddin to victory over the communist atheists?”
“Yes, Osama bin Laden.”
Ashrawi paused, as if to let the great name sink in.
“He is preparing a powerful blow against the infidels.”  The Egyptian stopped talking while an old man passed by, walking his dog. Then he continued. “He seeks men who will give their lives to Allah.”
Ashrawi put his hands on Mohammad’s shoulders. “Are you such a man?”
“I am.” Mohammad’s heart beat fast. “What does the Sheik require of me? I am prepared for whatever he will ask.”
“The first thing that he asks,” smiled Ashrawi, “is patience.”
“Of course. I can be very patient.”
“Good. We will talk again, in another place.”
A week later, they met on the great plaza in front of the World Trade Center. “Let’s go across the street,” suggested Ashrawi. “It is very quiet in the cemetery of the old church.”
Sitting on a bench in the churchyard of St. Paul’s Chapel, the two men spoke in low voices.  “You are a smart guy, Mohammad,” Ashrawi began. “You can learn many things, true?”
“Yes, praise be to Allah, I believe that you speak the truth.”
“Even though you are here only one year, your English is better than mine, true?”
“Yes, thanks be to Allah.”
“Do you think that you could learn to fly an airplane?”
“If someone will teach me, I can learn.”
“Good. Very good.”
“But why must I learn such a skill?”
Ashrawi did not answer directly. “My brother and I were very impressed by how well you did with the cigarette business,” he told Mohammad. “You learned how to move around this country without attracting the attention of the police. Some of our Arab brothers can’t take the subway three stops without the police getting suspicious.” He laughed and lit a cigarette. “But you drive your car better than the Americans drive. And no cops ever stop you, even in the southern states where they hate all dark-skinned people.”
“True,” admitted Mohammad. “I stay right below the speed limit, not too fast and not too slow.”
“One other thing we saw about you, my brother. You can work alone. This is very important. Many of our most dedicated brothers could not spend days or weeks apart from other true believers.” Ashrawi paused. “The Sheik believes that you are the right man for a most important task. “
“You have spoken of me to the Sheik?” Mohammad was awed.
“Of course,” said Ashrawi. “He is the one who must make all of the great decisions. He is the one who must select the true warriors for Allah.”
“I am grateful.”
The Egyptian continued. “The Sheik thinks that you could learn how to fly the airplane that we need for this new mission.”
“Please,” said Mohammad, “let me know what I must do.”
Ashrawi stood up and took off his jacket. Mohammad realized that he was making sure there was no one watching them. The cemetery was empty.  “Praise Allah, the Sheik has decided that you should go to one of the American schools for flying airplanes.”
Mohammad nodded. He began to see the outlines of a plot. They would capture a plane and trade hostages for the brave fighters imprisoned by the Israelis. He would be the pilot of this hijacked plane. Perhaps they could even force the Israelis to retreat from the West Bank.
“Since you know the states of the South, the Sheik has decided to send you to a flying school in Myrtle Beach in the state of South Carolina. Do you know the Myrtle Beach?”
“Yes, it is a place where infidel women go to bare their bodies beside the ocean.”
“You will go there and enroll in a flying school and complete the course. The Americans make it very simple. You can apply to the school for fifty dollars. Go to the public library and do the application on the internet and then get a money order for the application fee.”
“Is it so easy to go to a school for flying?”
“Very easy, because it is a big money business. Americans sell their own sisters for money, no?”
“This is true.” Mohammad laughed.
“The tuition for nine months is twenty-five thousand dollars.” Ashrawi took a large manila envelope from his coat. “Here is thirty thousand dollars in cash. Use it to pay the tuition, and find someplace to live while you are taking the flying lessons.  A cheap motel, not one that the school recommends. That way you do not have to make unnecessary conversations with the infidels
Mohammad held the envelope in his hands. The money made it heavy.
“Here is a new cell phone.” Ashrawi added. “ I will call you only on this. You will use only this phone to call me. There is one number programmed into it. That is the only way you will reach me, you understand?”
The two men embraced. Tears were in Mohammad’s eyes. Ashrawi walked away quickly, going past the ancient, tilting gravestones and disappearing into the crowds of lower Manhattan.