The Ancient Flint Mines of Coxsackie 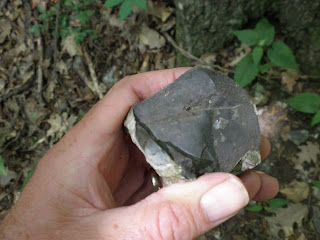 The pre-contact Mohawk village site which we recently explored was quite self-contained and focused primarily on defense. Hunting and agriculture would have supplied basic needs and since the site was hidden away from canoe routes along the major rivers, any trade would have been necessarily limited.  However, there is evidence that life before European contact for the numerically superior Algonquin peoples along the Hudson River was far less harried and much more open to indigenous trading networks.

According to Marist College Professor Thomas Wermuth, the Mohicans often engaged in warfare against the Mohawks for territorial hunting rights, However, they were not in competition with other Algonquin-speaking tribes such as the Wappinger who lived between Manhattan Island and Poughkeepsie, and the Delaware (or Lenni Lenape) whose domains stretched southward past what is now Philadelphia. The three tribes, and their many subgroups, did not make war on each other, apparently shared similar religious beliefs, and traded goods among each other. 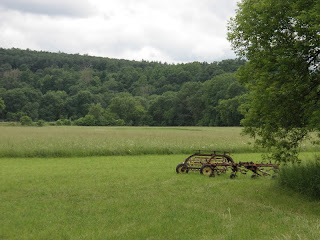 Leeds Flat near Catskill was once a prosperous Mohican village


Although many people know the Mohicans only from the title of James Fenimore Cooper’s misnamed novel, The Last of the Mohicans, the tribe does survive to this day,  although in far fewer numbers than the Mohawks. Their tragic fate was a direct consequence of the friendly relationships they established with Henry Hudson on his appearance in 1609 and with the Dutch who followed, bringing with them waves of pestilence in the form of measles, influenza and small pox. As their numbers fell, the Mohicans were defeated in battles with the Mohawks,  the final one according to legend at RogersIsland in the Hudson River near Catskill. 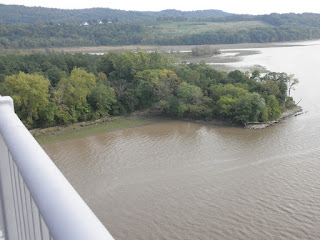 The Rip Van Winkle Bridge crosses Rogers Island,
where the Mohicans were defeated  by the Mohawks


Evidence of the rich economic life of the Mohicans and those who came even before them, however, has not disappeared. In the town of Coxsackie, only a few miles downriver from Albany, is one of the most important flint deposits in the North East. For centuries this ridge was mined by indigenous peoples for the high quality stone known as Deepkill flint that was essential to indigenous technology. An expedition led by Dr. Arthur C. Parker for the New York State Museum of Natural History mapped the site in 1921, finding 200-300 flint pits and three large quarries. They also identified stations where chunks of flint were sorted and chipped to form arrowheads, spear points and other tools.

According to Dr. Parker’s The Great Algonkin Flint Mines at Coxsackie:

A view of Flint Mine Hill leads to the conclusion that it is one of the most important Indian localities in the entire state. To the Indians it was a great discovery and it remains today the outstanding monument to aboriginal endeavor. Flint to the red man was a vital necessity; it was as necessary to the aborigines as steel is to the present age. Here on Flint Mine Hill was a vast aboriginal industry. Here Indians from far and wide obtained flint for their chipped implements and from these quarries flint was sent to distant regions. It seems quite probable from an examination of the hill that from 50 to 100 Indians worked upon it for a period of at least 1,000 years during seasons when work was possible, necessary and profitable.
The site is indeed vast enough to have been worked for centuries, and a total of 1835 acres were placed within the Historic District when it was listed on the National Register of Historic Places in 1978, thanks largely to the efforts of Mabel Parker Smith.
Clearly, we needed to visit this site, and finding it required far less effort than locating the lost village of Otstungo, thanks to a helpful article in the Hudson Register Star by Greene County Historian David Dorpfeld. Following  Dorpfeld’s directions, we located a steep wooded ridge just south of the Coxsackie Correctional Facility.
Although not marked by any signs, the site is owned by the Long Island Chapter of the NY Archeological Association in Southold, NY, according to their 1994 press release. Of course,  visitors should not remove any pieces of flint or artifacts they may come across. Also, the ground is very uneven and potentially hazardous. 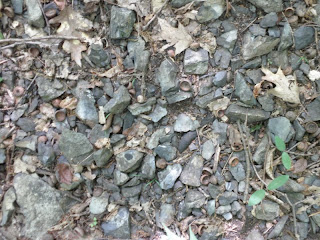 Fragments of discarded flint  and chert cover the forest floor


As soon as we set foot into the woods, we found evidence of ancient flint work literally everywhere. The forest floor was covered in fragments of flint, large and small, and the trees had pushed up amid layers of broken flint. Initially working our way up a short ravine, we found so much flint debris that it appeared that the ancient workers must have been sorting flint at the head of the ravine and throwing discards down the slope. 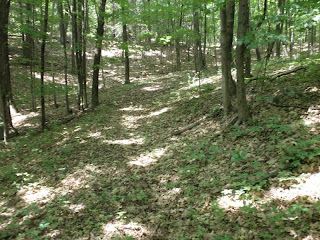 An old cart road on Flint Mine Hill


Only a hundred feet into the woods we found a long unused cart road, and realized that this might well be the farm road of Colonel Jacob Dunaef mentioned by Dr. Parker as the way into the mines. From all appearances, the road had seen no use in many decades. 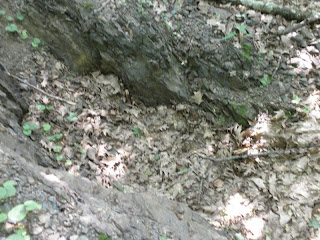 One of the larger of several hundred flint pits 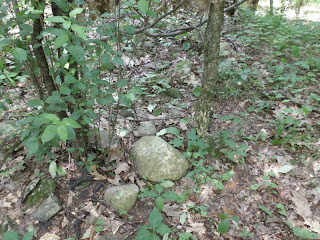 
Following the road uphill, we passed what had to be numerous flint pits, as evidenced by the layers of broken flint surrounding each depression. We also saw sites where non-flint boulders had been arranged, possibly to serve as workshops or fire pits for cracking the rocks. 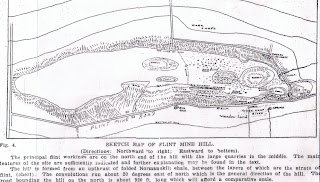 We then came downhill, following Dr. Parker’s map, and walked south along the ridge in search of the large quarries he described. Once again there were signs of a long unused cart road. After passing some flint pits not too different from those on the brow of the hill, we startled a deer and then saw what was unmistakably a large prehistoric quarry, about 150 by 50 feet, and up to thirty feet deep. The piles of discarded flint that littered the area appeared to be the bluish high quality stone for which the mine was known. Just to the south was another, somewhat smaller quarry. 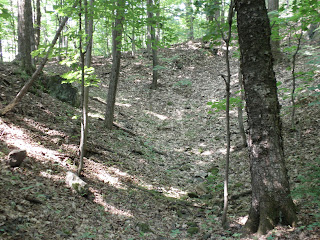 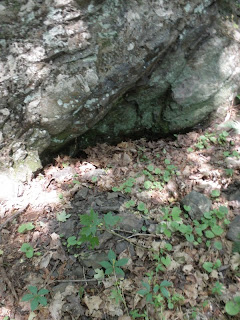 ancient excavation on the quarry wall


How could prehistoric men, equipped with tools of wood or stone, have performed such wonders, even if succeeding generations and cultures returned to this hill? According to an article by Charlie Brown in the Greenville Press (1/28/99), the ancient workers used a fire and water method to extract the flint, a practice dating back 12,000 years to the very first human hunting bands in the region:
“A fire was built on the rock to get it as hot as possible. Then water was poured over it to crack the rock so it could be removed. This process, repeated over and over, created huge quarry holes – over 300 at this site, some of them 40 feet deep and 60 feet wide. Waste chip piles are still there, including partially completed or broken tools.

An article in the Albany Times Union (4/8/62) by John Douglas also expressed the view that the site had been used for 12,000 years, back to a time when the first nomadic hunters reached this area in pursuit of mammoth and other large game of the late Glacial period.  These “paleo-Indic” people, as Douglas called them, may have had similarities to the Eskimo or Inuit:
“No one knows how the paleo-Indic men discovered the flinty hill at Coxsackie. But there is no question they did. The fluted projectile points – called Clovis points – characteristic of the breed and unquestionably of Coxsackie flint have been found in at least two locations, one in Pennsylvania and the other at Bull Brook hard by the Massachusetts shore.”
According to Douglas, the area was free of human inhabitants for 5000 years following the departure of the paleo-Indic people. Possibly, they were ancestral Inuit who followed the retreating ice to the polar regions where they lived at the time of European contact – and that only later did a new wave of migrants originating in Asia reach the East coast, becoming ancestors of the people who encountered Europeans in the early 17th century. And the newcomers were soon mining flint here. (A projectile point made with Deepkill flint was found in 1967 at an Archaic site near Lake George, and carbon-dated to 1700 B.C ) 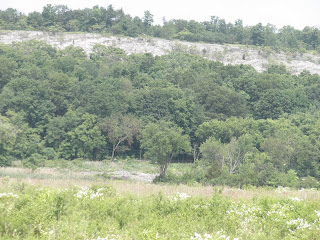 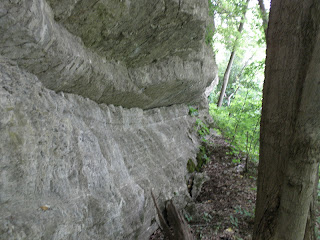 Whoever the very first inhabitants may have been, the identification of Deepkill flint from Coxsackie with Clovis points from the very earliest period of human settlement in this part of the continent has been supported by scholarly work at the Bull Brook and the Wapanucket  sites in Massachusetts, indicating that this site is among the most ancient flint works in the Americas. 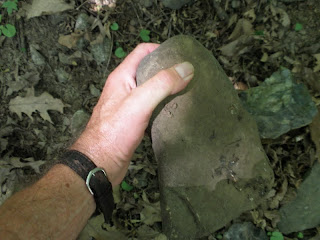 Possibly an ancient hammer stone?
Given that flint was taken from this ridge for thousands of years, it is fascinating to speculate on how the work was organized. Clearly, much work was done on site and numerous arrow and spear points were recovered by the 1921 expedition, as well as by souvenir hunters. Both Dr. Parker and John Douglas noted that flint cores can be found in abundance at this site. In all likelihood, choice pieces were taken back to home villages for working during the long winters. And given the abundance at the site of such easily portable cores, weighing no more than 20 pounds each, it is probable that that they became objects of trade. 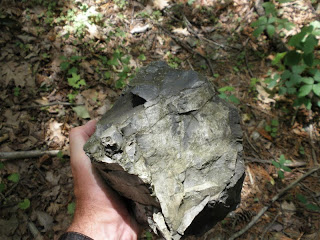 Flint cores of this size are plentiful throughout the site


Lost to us are the myths and rituals that undoubtedly surrounded such essential work, but they must have formed a major part of coming here. Also lost is any record of conflict over the site, or treaties that may have fostered sharing of the resource. Dr. Parker offered a theory that a guild of flint craftsman lived near the hill and controlled access, but there is no solid evidence for his theory. 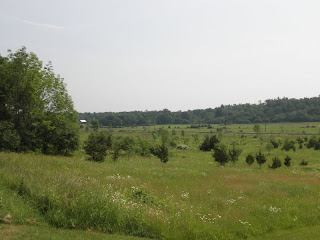 Indigenous people camped in this meadow just east of the ridge.


There is, however, evidence of extensive camping on the flat fields between the ridge and the railroad.  According to an article by Diane Galusha (publication and date unknown) local farmers had been uncovering arrow heads and other implements for years from these fields surrounding the hill and it was one of their number, Jefferson Ray, who brought the site to the attention of Dr. Parker, who postulated that large groups camped temporarily on the fields while they worked the flint. The ground, according to Parker was “so filled with flint chips that they might have been shoveled out by the bushel full.”
Although his group was only funded to stay for a single month in 1921, Parker quickly grasped the vast size and scope of the site. Following the visit, he donated over three thousand flint implements, as well as stone hammers and mauls, to the New York State Museum of Natural History. (now the New York State Museum) 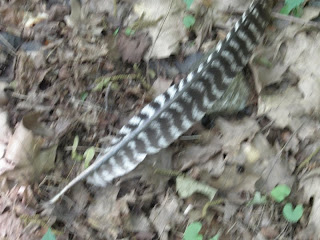 We lingered in the woods for a long time, imagining the busy scenes that once took place here. Then, looking down, we saw the feather of a red-shouldered hawk, a sign perhaps that the spirits of this place welcomed us?