Greater Love: a Tale of the Underground Railroad in Little Falls, New York 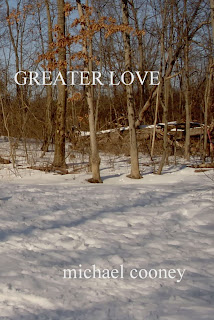 Greater Love, available for $.99 on Kindle, is a new short story about the Underground Railroad in Little Falls, New York. The historical record of he activities of the Underground Railroad in that immediate area is very limited, but Richard Buckley has found evidence that there was a station at Little Falls, centered on the African Methodist Episcopal church which stood– as far as I can determine - on West Main near Furnace Street.  A leader in that congregation, Enoch Moore, was himself an escaped slave and a chief organizer of the town’s branch of the secret network that guided fugitives from the slave states all the way to freedom 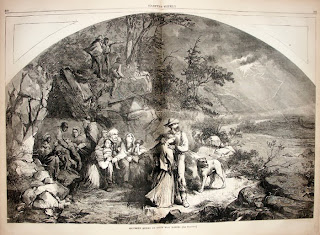 
Enoch Moore appears in the story, which is set in 1853 when the Fugitive Slave Act, passed a year earlier, had unleashed legions of southern slave-catchers armed with the legal authority to pursue fugitives  anywhere in the U.S. and to deputize free citizens in the North to aid in their manhunts.  Under the Act, anyone aiding a fugitive would face a $1000 fine (at the time an enormous sum) and a six month jail sentence.

Richard Buckley’s research makes it clear that the anti-slavery efforts in Little Falls were not confined to African Americans.  In Greater Love, two leading white citizens of the town are active in aiding fugitives:  Judge Nathaniel Benton and former congressman and attorney Arphaxad Loomis.  Loomis, who had liberated the town from the death grip of the Ellice Estate twenty years earlier,  was clearly a man of strong ideals and I believe that it corresponds with his character to imagine him as an ardent member of the Underground Railroad. 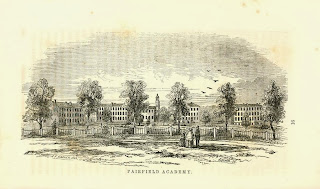 Much of the drama is set in an actual cavern which extends for an unknown distance in the vicinity of West Monroe Street and Topnotch Road.  The cavern, whose very existence has been almost completely forgotten, was known in the 19th century as Hinman’s Hole and evidently resembles Howe Caverns in its geology, consisting of a series of tunnels and an underground stream.  It appears that the only time it was explored was in the 1840s when a group of students from the Fairfield Academy descended into its dangerous depths. (The cave also probably resembles Schroeders Pants Cave in Dolgeville where cave explorer James Mitchell lost his life in 1965)
Hinman’s Hole is depicted in the story as a refuge for a family of fugitives who are being closely pursued by a band of southern slave-catchers. The possibility that the cave was actually used as such a hiding place is in the category of myth.
What is very true is that the East-West route from Troy to Rochester was an important branch of the Underground Railroad during the 1840s and 50s. Frederick Douglass in Rochester and Harriet Tubman in Auburn played a major part in the final stage of moving thousands to Canada.  Another, less well-known former slave and anti-slavery leader was the Rev. JermainWesley Loguen, who was educated at the Oneida Institute near Utica and centered his activities in Syracuse. According to Richard Buckley, Rev. Loguen had visited the AME Zion church in Little Falls. 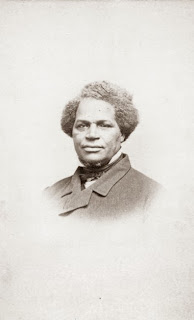 Louguen, who escaped slavery in Tennessee. spoke eloquently against the Fugitive Slave Act and had been helping fugitives for many years. In his memoir he describes an 1839 escape in Syracuse when a slavemaster named Davenport came north with what appeared to be his wife, infant child, and older daughter Harriet. The older daughter was a slave, despite her white appearance, and Davenport’s intent was to sell her for $2500 to a local man “for the worst of purposes.”  The citizens of Syracuse sprang into action and spirited her off to Canada and the city remained strong in the anti-slavery cause through  the next two decades. 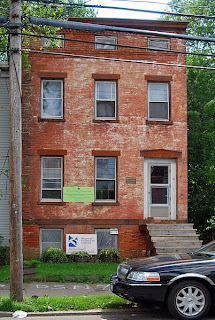 Anti-slavery feeling also ran high in the Capital District where Stephen Myers assisted in setting the fugitives on the east-west route.  Troy was the scene of a famous and successful effort to forcibly free a runaway, Charles Nalle, from the custody of slave-catchers.  Harriet Tubman, who happened to be in the area, took a leading role in breaking Nalle out of jail in an 1860 episode which gained national attention and inflamed secessionist sentiment just before the Civil War. 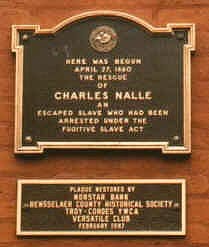 Amsterdam was also an active center, with shoemaker Chandler Barrett providing refuge. People in a number of very rural Mongomery County hamlets, including Ford’s Bush, Fonda’s Bush and Ames, are said to have sheltered fugitives and helped them on their way. 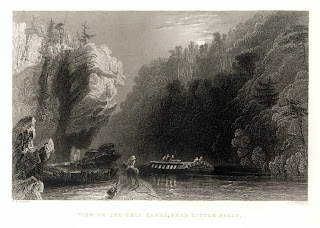 Engraving of the Erie Canal at Little Falls, 1839


The fugitives probably made most of the journey on foot. The Erie Canal, opened in 1825, was possibly used but canal boats were mule-drawn and proceeded at no more than a walking pace.
The world’s first regularly scheduled steam railroad had opened between Schenectady and Albany in  1831 and within ten years it was possible to travel all the way to Niagara by train, and many fugitives seem to have used the railroad.  However, the influx of southern slave-catchers after 1852 probably drove many  fugitives back to foot travel, possibly through rural regions far from the main travel routes of the Mohawk Valley. Buckley mentions the role of Zenas Brockett, whose farm was in Manheim, and that farm becomes a destination in mentioned in the story.
It is certainly safe to assume that many tense moments occurred in and near Little Falls as fugitives were secretly moved from one refuge to another.  Resisting slavery in this way became a federal felony in 1852 and the risks to liberty and reputation were high; it is not surprising that little to no record of such resistance has been passed down.  The feelings of Northern whites about slavery were divided, with abolitionism a minority view throughout the 1850s.  The Ladies Aid Society of Little Falls might organize an ice cream social to benefit the AME Zion church, as they did according to Buckley, but if leading citizens like Arphaxad Loomis directly assisted in hiding fugitives, they might well have concealed their violations of  law. 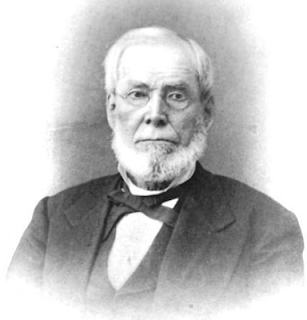 And if slave-catchers from the South mysteriously vanished in Little Falls, as they do in this story, their disappearance might well have been concealed by the strongly anti-slavery political leaders of the village.
Greater Love can be purchased exclusively on Kindle for $.99.


The Rev. J.W. Loguen, as a Slave and as a Freeman, a Narrative of Real Life by Jermain Wesley Loguen

Posted by Michael Cooney at 7:12 AM 2 comments: