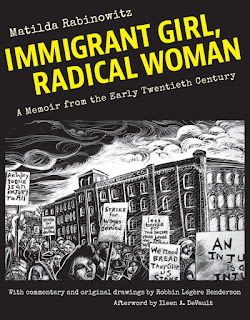 Robbin Legere Henderson has published Immigrant Girl Radical Woman, the memoir of her grandmother Matilda Rabinowitz, who was a key leader of the 1912 Little Falls textile strike and an organizer in many other labor battles. The book is beautifully illustrated with Robbin's own sketches.

The book is available from Cornell University Press and following is the description from that site:


"Matilda Rabinowitz’s illustrated memoir challenges assumptions about the lives of early twentieth-century women. In Immigrant Girl, Radical Woman, Rabinowitz describes the ways in which she and her contemporaries rejected the intellectual and social restrictions imposed on women as they sought political and economic equality in the first half of the twentieth century. Rabinowitz devoted her labor and commitment to the notion that women should feel entitled to independence, equal rights, equal pay, and sexual and personal autonomy.

Rabinowitz (1887–1963) immigrated to the United States from Ukraine at the age of thirteen. Radicalized by her experience in sweatshops, she became an organizer for the Industrial Workers of the World from 1912 to 1917 before choosing single motherhood in 1918. "Big Bill" Haywood once wrote, "a book could be written about Matilda," but her memoir was intended as a private story for her grandchildren, Robbin Légère Henderson among them. Henderson’s black-and white-scratchboard drawings illustrate Rabinowitz’s life in the Pale of Settlement, the journey to America, political awakening and work as an organizer for the IWW, a turbulent romance, and her struggle to support herself and her child".


And here's an example of Robbin's illustrations in the book: 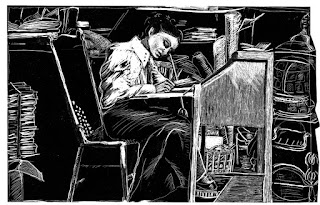 
More on this site about Matilda Rabinowitz plus photos
Posted by Michael Cooney at 11:45 AM No comments:

New edition of "The River That Flows Both Ways" 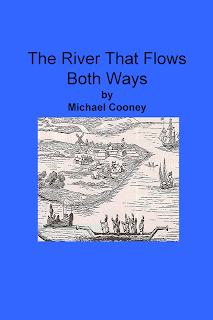 The River That Flows Both Ways has been issued in a revised edition drawing on new research and correcting inconsistencies noted by readers in the 2008 edition. The novel centers on Harmen van den Bogaert, a nearly forgotten early Dutch explorer and surgeon who has recently been recognized as a gay martyr. In a 2015 Huffington Post article, Gay New Amsterdam: The Queer Case of Harmen van den Bogaert, Kim Dramer describes the historical record upon which I draw in this novel. And Ted O’Reilly, the head of the manuscript department at the NY Historical Society posted an interesting article in June: The Bad Fate of Harmen Meyndertsz van den Bogaert. George O’Connor also published a well-received graphic novel on Harmen’s visit as the Mohawk villages: Journey into Mohawk Country.

My novel is told through the voice of Matouac, a young Mohican who comes to live with Harmen and his family after his own family was slaughtered by Mohawk raiders. The story is imagined as being transcribed by the Calvinist pastor, Johannes Megapolensis, who provides his own footnotes to quibble and critique the tale of the boy he views as a heathen. Many other historical figures from the Dutch settlement at Fort Orange (now Albany NY) appear, including Harmen’s wife Jelisje and his African slave, Tobias. Harmen’s downfall came when his relationship with Tobias was discovered, and they both fled to the more tolerant society of the Mohawks.

Although suppressed by Christian missionaries, indigenous tribes often made provision for same sex couples, whom many called “two-spirits.” The seventeenth century century Dutch, like other European countries of that era, provided the death penalty for the same behavior. The power differential between Harmen and his African slave certainly suggests to us today that the relationship was predatory. However, the historical fact is that Tobias fled with Harmen into Mohawk country, perhaps out of fear or dependence but also possibly out of genuine affection. Here is a brief excerpt from my book on their refuge with the original inhabitants of the Mohawk Valley:

There were also two women living in the lodge. They dressed as men and cut their hair in a scalplock. They were seldom in the lodge and were usually out hunting with their bows.
“I am happy here,” Harmen said to me. “These are good people and they do not say that Tobias and I are wicked or wrong. They say that they will teach me all their ceremonies and in the corn festival next year I will be made a member of their secret society.”
“Will you be here that long?” I asked.
“I want to stay here,” he said. “I will never return to the country of the whites.”
“Is Tobias is happy here?” I asked him.
“Yes,” he said, watching Tobias help one of the men-women stretch a deerskin over a framework made of branches. “The Mohawks do not look down on him because he has black skin. He can be a person here, as he could never be among the whites.”
Realizing that Catharina was listening closely to our conversation, he added. “You, too, Catharina, can find a true home here. You will never be a slave again if you live with the Mohawks.”
I knew that the Mohawks were capable of great cruelty and might easily turn on us as they had turned on Ondessonk. I never forgot my grandfather’s warning that they, even more than the whites, were the true enemies of my people. But for now, the Mohawks were our friends and we would be warm and have enough to eat as the winter deepened. 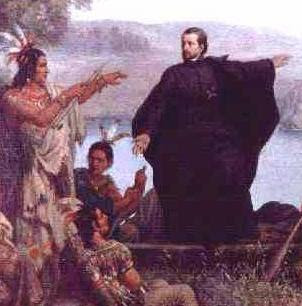 Ondessonk, to whom Matouac refers, meant "the indomitable one" and was what the Mohawks called Isaac Jogues, the Jesuit missionary and martyr. In the novel Matouac comes to know and admire him, and is present when he is killed at Ossernenon.

The River That Flows Both Ways, 2017 edition is now available:


For more on the historical sources of the novel see The Tale of Harmen Meyndertz van den Bogaert on this site.

Posted by Michael Cooney at 1:11 PM No comments: