Fictional stories in a real place

The eleven short stories in the newly published collection, Asteronga New York, are undeniably inspired by growing up in Little Falls during the late 1950s and 1960s.  But anyone looking for actual models for Uncle Artie, Juliana, Marjorie, Ronnie Van Vranken, Gracie McGee or any of the other characters will be disappointed. No one should search their memories to recall an apparition of the Virgin Mary or a Hungarian boy who rose from the dead. All the people and events in this book are as imaginary as the narrator who tells us about them. 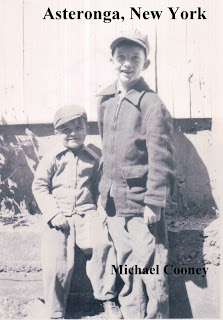 Asteronga, New York may also be purchased  on Kindle for $2.99.

Excerpts from two of the stories
in the collection:


from: " An Appearance of the Blessed Virgin Mary"

I woke up cold, wet and stiff just as the sky was starting to turn gray. Feeling miserable, I stood under my cousins’ carport and watched the drizzle for a while, getting my strategy together. I could just walk into the Selective Service office, I figured, and tell them who I was. Then I’d act crazy. But what would I say? What could I do to convince them I was unfit for Viet Nam? The old guys on the Board must have heard the same act every day. Thousands of guys my age and younger were being called up and about half a million were over there already.  The death count was up to about forty or fifty names a week. Thinking about it now, I realize that half the names on the Wall in Washington were already listed somewhere by then.


The rain continued to come down, getting heavier, and the sky was solid gray. I noticed the Valley Bus stopping in front of the closed ice cream store, so without thinking about it any more, I hopped over the backyard fence and ran to the bus. A half hour later, I looked out the window of the bus as we passed the Hotel Snyder and rolled to a stop directly in front of St. Mary’s.


As the bus pulled away toward St. Johnsville, I looked up at the familiar steeple and decided to just go into the church for a minute. I felt like seeing the stained glass window where the children come to visit Jesus. Once I was inside, all the old feelings of my praying days with little Christina came back to me.


She and her family had packed up and moved out to California years before but the church was unchanged and completely empty. The same smell of dust and wood polish and a lingering fragrance of incense from Benedictions of long ago. I slumped into a back pew, genuflecting before I knew what I was doing. I had been thinking that I was an atheist but once I was back in St. Mary’s, the old feelings of devotion rolled up out of me. I began to pray without any words, just with emotion, letting my feelings pour out.  I discovered that my eyes were full of tears.


Later that day, after stopping in to say hello to my parents, I grabbed a pile of camping gear from the attic and headed up to the woods near Indian Cave. Now that I was back home, my first idea was to build a hermitage and settle down to some serious praying.


Now, you may be thinking that I had smoked some funny stuff down in New York City that me right over the edge into religious mania, but I hadn’t really smoked that much grass and I never took any LSD or anything like that. I just had an impulse to do some serious praying on my own. This was not a new idea for me, as I explained earlier. I was always inclined toward the monastic lifestyle, in a sense.


I settled down that night in the cave, just rolled up in my sleeping bag and snoring away. Going to the cave probably was something like going back to the womb. First of all, it was narrow and dark, hardly a cave at all, more like a cleft in the rocks. The rocks in the hillside are way too hard to allow for a regular limestone cave full of dripping stalactites and extending for miles underground like the one Tom Sawyer and his pals got lost in, but as a kid, Indian Cave had pretty much defined caves for me.


My brother had introduced me to the cave when I was only four or five. We played various games in it, mostly some variation on Cowboys and Indians. I remember once Joe and I went up on the hillside in the winter and dug down through the snow to find the entrance of the cave and then we huddled together inside it, looking out at the freezing cold world outside.


In the morning, I was a little stiff after two nights sleeping outdoors so I built a small fire of twigs to warm up and tried a few prayers. All that came to mind was the Hail Mary and Our Father routine and somehow that didn’t seem to suit my surroundings. I did some Zen meditation like Jack Kerouac used to write about, trying to focus my mind but the tweety-tweet singing of the birds kept distracting me from the Empty Mind thing. I gave up on the spiritual exercises and went down to Reese’s Mom & Pop store on East Madison and bought a six pack of Utica Club. By mid morning I had finished the beer and gone back to my sleeping bag for a nice nap.


When I woke up around noon, my mind was clear, or at least I thought it was. I decided that I would get my gear together and walk up through the Adirondacks to Canada. Cramming what I could into a backpack, I rolled up the sleeping bag and tied it on top of the pack. Looking around at my campsite, I said a few more prayers and strode off in what I assumed was a northerly direction. The only problem was that I didn't have a compass so after I had walked about five miles, I realized that I had been heading due east.


I was getting tired, after all that beer and walking and no food, so I sat down on a log and watched the cars skimming past on Route 5, a road that pretty much directly followed an east-west line up the Mohawk Valley from Albany to Syracuse.


About an hour or so later, I made it to the trail that led down from Clay Hill Road to the flat rocks below the dam. Only one car, a beat-up ’57 Ford, was parked near the top of the trail. Scrambling downhill, I fell once, felt like an idiot, and dusted myself off before going on. I heard some laughing and splashing sounds so I knew I was getting closer to the flat rocks.


When I was in high school, I used to go down to the rocks with Mark Halsdap, who’d drive his brother’s El Camino. He'd invite as many of us as could fit to jump into the back and we'd head off to the pond.


Usually, somebody would have ID for beer and we’d arrive semi-drunk and acting like idiots. Mostly, it was a bunch of guys. We kept hearing stories of girls who would join in the skinny dipping off the rocks below the dam, but to tell you the truth there were almost never any girls there. The place was too wild and unsupervised for most of them, except maybe Gracie Simchak.


That's why I was so surprised when a girl in a two piece bathing suit came running full speed out of the trees. “Whoa!” I yelled, “Watch out!” Bam! She crashed right into me, and practically knocked me over.


I thought maybe she was terrified but I’m not that good at reading people.


Just then two guys came running like maniacs, followed by another girl. She was holding the top of a two piece as and her eyes were wild.. I couldn’t help noticing that she had very nice tits.


Comments from readers are welcome at wildernesshill@gmail.com.