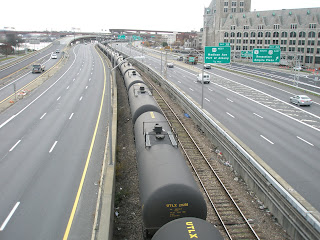 For several months long trains of rail cars full of crude oil can be seen inching along, or stopped altogther, beside I-787 in downtown Albany. Other tankers fill the rail yards off I-90 not far from the SUNY campus.  All are waiting to offload into the tank farm at the Port of Albany for transfer onto barges for transport down the Hudson River to the New York harbor, and from there to Philadelphia and other East Coast refineries. There is simply so much oil pouring through Albany  these days that the limited number of holding tanks, and the relatively small size of the river-going tankers, can just barely manage it. 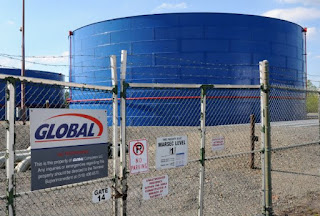 The trains, up to 80 tankers each, originate in the growing Bakken oil fields of Dakota and Montana and have traveled over a series of states and down the old NY Central tracks through the Mohawk Valley without attracting much notice – in stark contrast to the huge political and public relations battle over the Keystone XL pipeline from Canada into Texas.

In “Rail It On Over To Albany – Moving Bakken East,” energy consultant Rusty Braziel describes the vast infrastructure in North Dakota sending out the Bakken oil across the country. Buckeye and Global Partners, the two companies active at the port, have maintained a very low profile about their role in transporting the crude from the Bakken oil fields of North Dakota and Montana. A couple of workers from the port told me recently that so few local jobs have been produced that the companies see no value in publicizing their heavy investment in the Port.

According to an October 27 article by Brian Nearing in the AlbanyTimes Union, neither the state Department of Environmental Conservation nor the Coast Guard have seen a need to update plans for containing any possible oil spill resulting from the increased traffic. And these kind of shipments are unprecedented in this area, according to port manager Richard Hendrick, who said,” "I am not aware that a drop of crude was ever shipped out of the port until the Bakken oil showed up this year.” Nearing goes on to write:

"Between Houston-based Buckeye Partners and Global Partners, located in Waltham, Mass., up to 395,000 barrels of oil a day could come into Albany on rail cars, and then move 150 miles down the river on tankers and barges to the Atlantic.  That is nearly 16.6 million gallons of oil a day, nearly half the potential output of a massive field thousands of miles away that is estimated to hold more than two billion barrels of oil, or even more, making it one of the largest oil reserves in the country. Locked in shale rock formations, the oil became reachable only after new rock-fracturing drilling technology was developed in 2008."

As with so many environmental issues, public reactions are intensely local, no matter what the global effects. Drilling for natural gas is the issue in New York, not the oil that is passing quietly through our state – even though the same  hydraulic fracturing technology produces both kinds of fossil fuel. The difference, of course, is that the profits and problems of potentially rich Marcellus shale gas fields under much of this state  are right in front of us– and the oil is being pumped far way.

Andrew Cuomo, who has long held the line on fracking for natural gas in this state, appears to be moving toward approval.  In response, A protest rally at the State Capitol has been called  by New Yorkers Against Fracking for January 9, to coincide with the Governor’s State of the State message – but thus far there’s no public anxiety over the risk of oil tankers on the Hudson 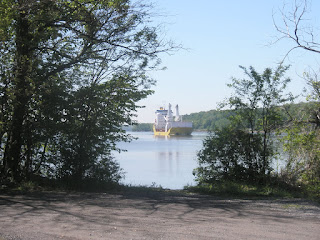 But maybe there should be, given the casualness with which state and federal authorities have reacted to the millions of gallons of crude oil passing through our region. After all, in 1989 a tiny crack in the hull of one tanker bringing oil upriver released a mere thousand gallons near Coxsackie and that took weeks to clean up.


And maybe, just maybe, it makes no sense to break up layers of shale hundreds of millions years old just to provide ourselves with a few more decades of fossil fuel that is wrecking the climate anyway.


And maybe we can learn something about long term survival from the prehistoric Iroquois who built their village on this shale hill in Montgomery County.


(Slightly different versions and of this post can be found on  Fire Dog Lake and on Daily Kos.)