Return to the village of Alfred Dolge 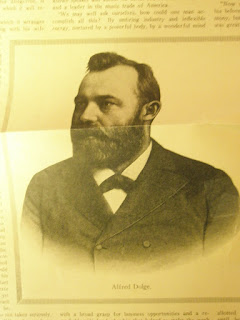 Dolge portrait from his obituary, 1922


Thinking about a new historical novel based on the life of Alfred Dolge, I recently returned to the village he founded, Dolgeville. In my earlier postings on this site, The Enlightened Capitalism of Alfred Dolge and The Downfall of Alfred Dolge I explored  his  history , but  was  left with many questions.  In publishing here some of my more recent thoughts on this remarkable visionary, I am looking forward to hearing from Dolgeville natives and others who share my fascination with his late 19th century mix of capitalism and socialism.


When I first posted a piece on the 1912 Little Falls strike eighteen months ago,  I heard from many people whose insights and comments guided the subsequent writing of my short novel of the strike, The Red Nurse. The panel discussion on the strike in which I participated on August 9 at the old Stone Mill was another great opportunity to learn from others who share an interest in that long ago struggle. 
I arrived in Dolgeville on a beautiful August morning and met with Bob Maxwell, president of the Dolgeville-ManheimHistorical Society, who graciously opened the society’s museum and archives to me. The museum is housed in an 1890 Firehouse on Main Street, built during the heyday of Dolge’s reign over the village. The first floor features a number of exhibits on village history, including artifacts from the Dolge family.  There is also a display of footwear manufactured by the Daniel Green Shoe Company, which continued for many decades an industry pioneered by Dolge. 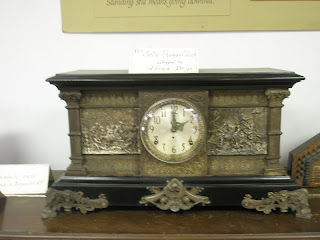 Clock from the Dolge home 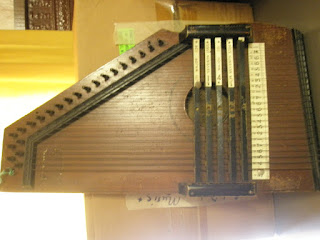 
The second floor contains a trove of materials that would require several doctoral students to do it justice. Cabinets packed with Dolge era files contain handwritten notes by Dolge, his school notebooks from Germany, family photographs and far more. There was a scrapbook kept by his son Rudolf, a phrenological study of Rudolf, the notes he made for his defense in the court cases that followed the bankruptcy, and a note he sent many years later from Venezuela to explain his role in the crisis of 1898. There were also piles of ledgers from the factories and books from the industrialist’s private library. I also found Dolge’s own notes for his defense in the court case of 1899. 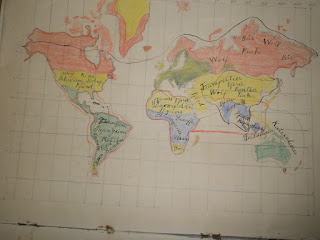 Map drawn by young Alfred as a student in Germany 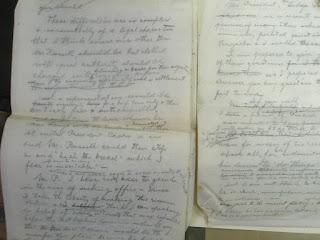 Alfred Dolge's notes for his own defense
I was particularly glad to find that the society offers for sale a photocopy of the very rare  book, History of a Crime, in which Dolge explained how his dream of an ideal industrial village was destroyed.  There were also fragile newspaper clippings in which Dolge was viciously attacked as responsible his own financial collapse. 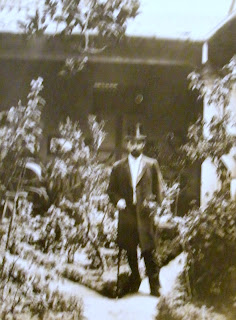 
In the self-published History of a Crime the industrialist provides a very detailed description of how he was tricked out of all he had built. After a brief summary of the conspiracy by Hardin and Ingham, the bulk of the book consists of depositions  in a lawsuit initiated by the Garfield Bank, and concludes with  Dolge’s  May 6, 1899 farewell speech, in which he says:


“I have been called a dreamer. Yes, I am a dreamer, full of ideals, full of enthusiasm for the good, the noble in mankind and nature, a firm believer in humanity and the possibility for everybody. The world would be better if we had more dreamers of this kind and fewer cold-blooded egotists who regard their fellow men only as an object for plunder.”


He paints himself as an idealist among knaves, but it simply defies credibility how such a brilliant and dynamic man could let himself be repeatedly deceived by Judge George Hardin and Schuyler Ingham, remaining loyal to them even as they systematically dismantled his companies from April to August of 1898. He is also less than convincing in his explanation of how his son Rudolf was prevailed upon to give a  power of attorney to the unscrupulous men who destroyed  not only his father’s wealth but  also the hopes that his workers had placed in the pension, insurance and profit-sharing plans dependent on the Dolge companies. 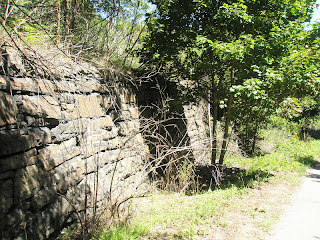 
Perhaps Dolge was overextended since financing the Dolgeville-Little Falls railroad and trusted Hardin and Ingham to devise means to outsmart his creditors. Perhaps his own hands were not completely clean, but this possibility cannot yet be determined with any certainty. It is clear, however, that Hardin and Ingham profited immensely from Dolge’s ruin and immediately destroyed the complex social welfare system he had built up. 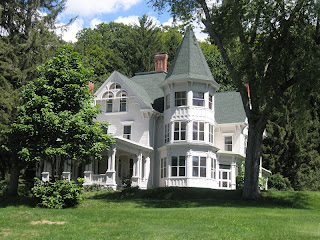 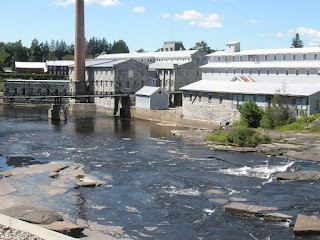 After only touching the surface of the archives, I walked around the village to see some of the many structures still in use 114 years after its founder left forever. The limestone factories on the East Canada Creek and the Dolge mansion are in fine repair, as they were on my last visit, thanks to the care of their current owner, Charlie Soukup.  The Turnhalle, the imposing social and cultural center of the 1890s community on Faville Avenue, currently houses Bergeron Company which manufactures strollers, car seats, and equipment for children with disabilities. It is heartening to see companies like Bergeron still making valued products here in America, although they are reportedly seeking Asian partnerships. 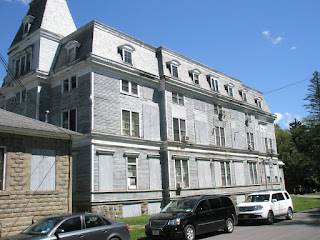 
I then followed Van Buren Street extension down to the location of High Falls Park, a gift of Dolge to the village which was, sadly, sold off by his creditors soon after his departure. I met a very friendly retired couple, the Andersons, now living near where the home of Dolge’s father once stood.  Christian Dolge was a revolutionary in Germany, imprisoned for his part in the 1848 uprising, and must have been quite a formative influence on his son.  He is said to have been friendly with Karl Marx, who fled Germany after 1848. Marx’s history of the uprising, and analysis of why it failed, is quite readable. (Marx’s Revolution and Counter-Revolution, or Germany in 1848 is available free on Kindle)
Christian Dolge 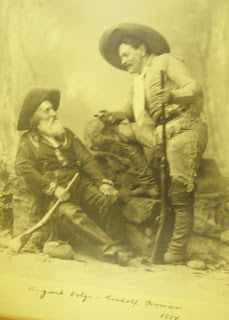 
Christian followed his son to Dolgeville by the 1880s and his farmhouse was the scene of many gatherings. He kept his own menagerie and the remains of his trout ponds are still on the Anderson’s property.  The Andersons told me what they knew of the High Falls Park and shared with me a map drawn by John Lacik. 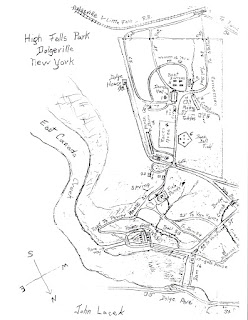 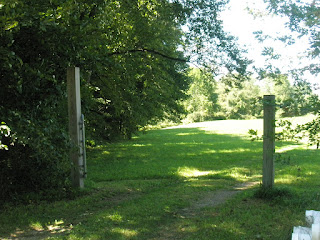 
Looking across what was once the ball field of High Falls Park, I tried to imagine the nearby woods as they were in the 1890s, a scene of wholesome recreation for the  workers and their families who lived a life beyond imagining for those toiling in the factories of Little Falls and similar milltowns. Here in Dolgeville, those who worked hard believed that a decent pension, healthcare, and education for their children was assured.  How many of them, I wondered, realized that their hopes and expectations depended entirely on the one man whose name the village bore?  And how many could have imagined that over a century later American working people would still not be assured of health insurance and a decent pension and disability protection, and moreover that those benefits already won would be under attack? 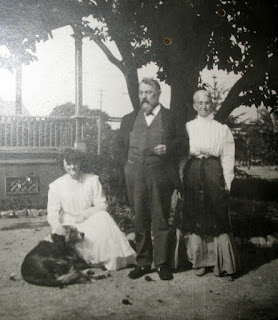 Mr. and Mrs. Dolge in later life.
Woman at left may be Dolge's sister Anna

My novel on the later life of Alfred Dolge, Mr. Dolge's Money,  can be found on Amazon in paperback for $9.95 and on kindle for 99 cents. The story centers on Alfred and Anna's grandson Joseph, or Jose, who is imagined as a son of Rudolf's from Venezuela. At the very end of World War I. Alfred dispatches the young man on a mission across newly Bolshevik Russia into a Germany in the midst of its revolution. In the course of Joseph's attempts to recover his grandfather's hidden fortune, he narrowly escapes from Lenin's secret police and the early Nazis and their followers from the occultist circles of Munich.

My  short factual biography of Alfred Dolge is also available on Kindle for 99 cents and as an illustrated paperback for $7.95. The Kindle version can  also be read on tablets,smartphones and PCs by downloading the free Kindle app. Amazon Prime members may also borrow the story through the Kindle Owners Lending Library.

Posted by Michael Cooney at 8:27 PM