from the Gifford Foundry to Iron Mountain 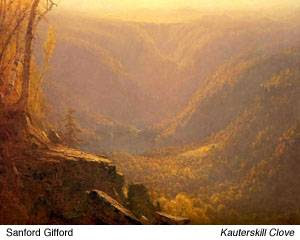 Columbia County in the 19th century was the site of iron mines and foundries that helped to build the American economy. Of the families that grew wealthy in iron and steel, the Giffords of Hudson were among the most influential. Although few signs of their industry remain, the art created by one of the heirs to that wealth is still celebrated. In 2003 the Metropolitan Museum sponsored an exhibit of seventy paintings by Sanford Gifford, who has long been ranked with Thomas Cole, Frederic Church and other painters of the Hudson River School.

In 1823, the year when Sanford was born, his father Elihu Gifford founded Starbuck, Gifford and Company. Elihu subsequently organized the Farmers' Bank and the Hudson and Berkshire Railroad. Sanford’s mother, Eliza Starbuck Gifford, founded the Hudson Orphan Asylum in 1846. The Gifford family continued to produce a variety of machinery in Hudson for a hundred and fifty years. 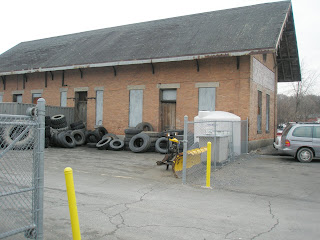 In 1856 the Giffords constructed one of Hudson’s oldest remaining industrial structures. Located at 736 Columbia Street, the exterior of this building retains its 19th century details, although its interior is much changed and has been used for many years as a warehouse by Van Kleeck’s Tires.

By the late 19th century, the Giffords specialized in the production of ice harvesting machinery, and merged with a Massachusetts manufacturer in 1905. The combined Gifford-Wood company built a new plant at 1 Hudson Avenue in 1910, using the latest steel frame and glass curtain wall construction, and continued to flourish for another sixty years. When the ice industry declined, as has been documented here at Upstate Earth, the Giffords shifted to coal-handling machines. During World War II, the firm operated round the clock to produce defense material. Among the company’s contributions were components for the landing craft which carried American forces ashore at Normandy and Iwo Jima.

After the death of Benjamin Gifford, the company was sold to Stowe-Woodward Industries, which went bankrupt in 1972. The advantages of the 1910 building, however, proved attractive for many years to another manufacturing firm, W.B. McGuire, which specialized in the production of the loading dock equipment much in demand during an era of imports. 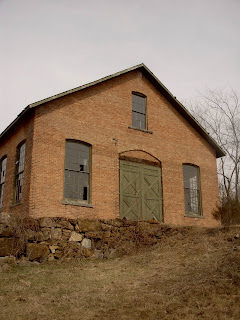 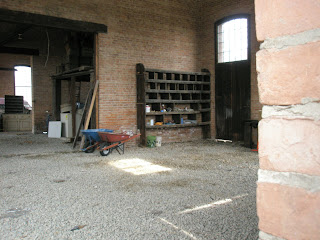 There are certainly few traces of the iron foundry and the other Gifford industries. Heavy machinery is no longer built here and nearly every manufactured product that we use comes to us from foreign factories. The ore that was forged into steel lies unused deep in our nearby hills. The mine at Mount Tom just south of Hudson that once employed 550 men, and the railway from the company port on the river, has vanished expect for this old machine shop, where locomotives and ore cars were repaired a century ago. 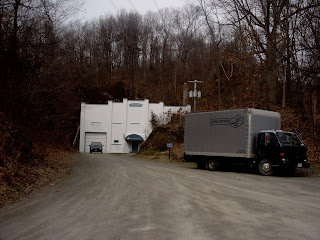 The old mineshaft that lies behind this gate into the side of Mount Tom, however, has had a very different fate. This mine became the center for a very successful, multimillion dollar international company, Iron Mountain, Inc., that has flourished in the global economy of our time.

Iron Mountain was founded by Herman Kraus, who had used the abandoned shaft since 1932 to grow mushrooms. In 1951, when nuclear war seemed imminent, he rebuilt the mine as a bomb-proof repository for corporate documents and his firm began to grow. In succeeding decades, as the fear of doomsday receded, Iron Mountain expanded into records management, secure shredding, and data protection. Iron Mountain currently serves 120,000 corporate clients in 31 countries and five continents. Only a few employees, however, work in the old mine shaft and the huge company’s presence is nearly invisible in the life of Columbia county.

The single best source for information on the old industries of our county is Peter Stott's Looking for Work; Industrial Archeology in Columbia County. Mr. Stott will be leading an industrial archeology bus tour on April 25, 2009. For information, contact the Columbia County Historical Society.