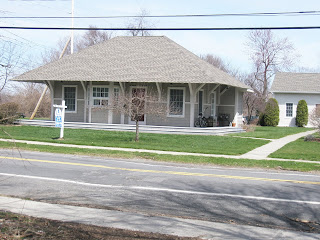 From 1899 to 1929 an electric railway ran from the city of Hudson to Albany, making stops every few miles at a total of fourteen villages and at an amusement park on Kinderhook Lake. The local took two hours, the express somewhat less, providing transportation for work, shopping and entertainment. The railway company produced its own electricity through a hydropower plant at Stuyvesant Falls, and also sold electricity to villages along its route. Now, as we struggle to find ways to reduce our nation's dependence on imported petroleum and to avert a climate crisis brought on by the burning of fossil fuels, the old Albany & Hudson Railroad Company seems like a nearly utopian form of transportation, totally carbon free and relying on local waterpower.


The line was created in 1899 by merging Hudson Street Railway, the Kinderhook & Hudson Railway, and the Greenbush & Nassau Electric Railway. The first was a street railway in Hudson, the second a steam railroad between Hudson and Niverville and the third a new electric line connecting Kinderhook and Hudson with Rensselaer and Albany . The newly organized line was completed in 1900 and was the first third rail interurban line in America. Financial difficulties dogged the enterprise, largely because of two tragedies in its early years, and it was reorganized in 1909 as Albany Southern. In 1924, the line reorganized a second time as Eastern New York Utilities Corp, before succumbing to the advent of the automobile and the Depression in 1929. The electric power station was acquired by Niagara Mohawk, which in turn was taken over by the British giant, National Grid, in 2002. Recent plans to once again generate power at the old Albany & Hudson site at Stuyvesant Falls were featured in an earlier edition of Upstate Earth.

The railroad was inaugurated with great fanfare in 1900 and much was made of its third rail design, the same model used to this day by the New York City and many other urban subway systems. In Valatie and downtown Albany, an overhead electric line replaced the third rail. According to the New York Times of November 22, 1900, “prominent railway officials from New York City arrived in Hudson on a special train and boarded two electric cars.” They then traveled the thirty seven miles to Rensselaer in one hour, in cars that were no doubt festooned with patriotic bunting. The company’s brand new Electric Park with its lakeside carousel and other electric-powered rides was not yet open, but was probably under construction. 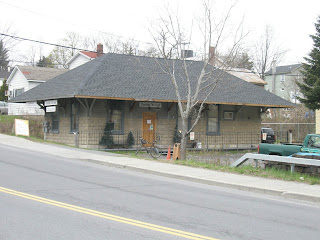 Tragedy, however, was only eighteen months away. On May 26, 1901 the Brooklyn Eagle reported on a collision on the new line which took two lives and injured forty people.

"FATAL STREET CAR COLLISION NEAR ALBANY, NEW YORK Albany, N. Y., May 27. -- Electric cars racing for a switch while running in opposite directions, at the rate of forty miles an hour, cost five lives yesterday afternoon by a terrific collision, in which over forty prominent people were injured, some fatally and others seriously. The lobby of the local post office filled with dead and wounded, hysterical women and children looking for relatives and friends, surgeons administering temporary relief and ambulances racing through the city, taking the wounded to hospitals, were the early intimation of the accident. The scene of the accident was at a point about two miles out of Greenbush, on the line of the Albany & Hudson railway. The point where the cars met on the single track was at a sharp curve, and so fast were both running and so sudden was the collision that the motormen never had time to put on the brakes before southbound car No. 22 had gone almost clean through the northbound car No. 17, and hung on the edge of a high bluff, with its load of shrieking, maimed humanity. One motorman was pinioned up against the smashed front of the southbound car, with both legs severed, and was killed instantly, while the other one lived but a few minutes.

Fully 120 men, women and children formed a struggling, shrieking pyramid framed with blood, detached portions of human bodies and the wreckage of cars. Some of the more slightly injured of the men extricated themselves and began to pull people out of the rear ends of the two cars. Almost every one was taken out in this way, and nearly all were badly injured. With both motormen killed it was hard to get at the real cause of the accident, but it was pretty well determined that it was caused by an attempt of the south bound car to reach a second switch instead of waiting for the north bound car at the first siding.

The cars weigh fifteen tons each and are the largest electric cars built, and so frightful was the crash that both cars were torn almost to splinters. Both cars were filled with Sunday pleasure seekers returning from the new recreation grounds that the railway had just opened."

Sixteen months later tragedy struck again, and a young woman and a small boy were killed in a collision at Rossman's Station. Marjorie Hoysradt, 20, and Edward Doyle,5, were among the "thousands of people" who had taken the railway's cars to enjoy a summer outing at Electric Park. According to the New York Times of August 2, 1902, cars were running at high speed to accommodate the crowds when the accident occurred. 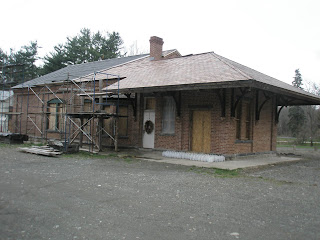 The North Chatham Depot
Mindful of this history, we set out to search for traces of the old railway and were surprised by how many still exist eighty years after the rails were torn up and the last car sold off. Fortunately, three depots are still in good condition, one as a home, one as a private business and one undergoing a complete restoration.

In Kinderhook the old depot on Albany Avenue is an attractive private home, currently offered for sale. In Valatie the depot at the intersection of Routes 9 and 203 houses "Thinking Out Loud," a ceramics business that offers art classes for children and adults. In North Chatham the old depot on Route 32 is undergoing extensive renovation.

The location of the railway near each depot can be identified by an overhead power line that follows almost the entire route of the railway. When the railroad ceased operations, the power plant and rights of way for electric lines remained valuable assets. Niagara Mohawk and subsequently National Grid have continued to run high-tension lines along this right-of-way acquired long ago by the Albany & Hudson. 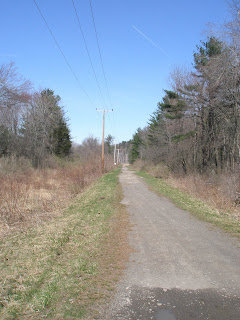 National Grid right-of-way near Valatie
Our next step will be to walk as much of that route as we can find, searching for traces of the past, and that will be reported in subsequent editions of Upstate Earth.
Posted by Michael Cooney at 5:27 PM