Ezra Pound: the Best and the Worst 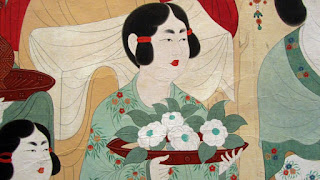 Ezra Pound was a truly great poet - and he wasn't. Leaving the United States in the early 1900s, he settled in London and later in Italy and immersed himself in European and classical culture and literature. His best poems came early, but as he moved into middle age, his charm and generosity were displaced by a bitter anti-Semitism. This led him to make rather incomprehensible propaganda broadcasts for Mussolini during the war. And that, in turn, led to his arrest for treason and his subsequent commitment to a mental hospital for twelve years. Pound appears in my novel In the Forest of Tombolo in scenes set at a prison camp in Pisa in and at St. Elizabeth's Mental Hospital in Washington.

I prefer to remember him now for his early and remarkably beautiful poems, often loose translations from other languages. Here is my wife's favorite:

While my hair was still cut straight across my forehead
I played about the front gate, pulling flowers.
You came by on bamboo stilts, playing horse,
You walked about my seat, playing with blue plums.
And we went on living in the village of Chōkan:
Two small people, without dislike or suspicion.
At fourteen I married My Lord you.
I never laughed, being bashful.
Lowering my head, I looked at the wall.
Called to, a thousand times, I never looked back.
At fifteen I stopped scowling,
I desired my dust to be mingled with yours
Forever and forever, and forever.
Why should I climb the look out?
At sixteen you departed

You went into far Ku-tō-en, by the river of swirling eddies,
And you have been gone five months.
The monkeys make sorrowful noise overhead.
You dragged your feet when you went out.
By the gate now, the moss is grown, the different mosses,
Too deep to clear them away!
The leaves fall early this autumn, in wind.
The paired butterflies are already yellow with August
Over the grass in the West garden;
They hurt me.
I grow older.
If you are coming down through the narrows of the river Kiang,
Please let me know beforehand,
And I will come out to meet you
As far as Chō-fū-Sa.

Posted by Michael Cooney at 6:20 PM