Getting the news from poetry: William Carlos Williams 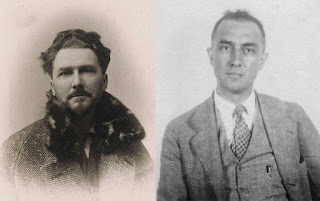 Ezra Pound and William Carlos Williams
in their early years

It is difficult
to get the news from poems
yet men die miserably every day
for lack
of what is found there.


Near the end of his life, William Carlos Williams wrote these words in his long, final love poem, Asphodel, That Greeny Flower. In an unprecedented historical moment like the present, poetry might seem like the last thing anyone needs to stay alive. And yet....And yet...

Poetry could be defined in many ways but one thing it isn't is the collections of words spewed forth by Trump or by Jerry Falwell Jr. or by Sean Hannity. Or throw in Putin, Bolsonaro, Duterte or any other 21st century autocrat who mangles language on his way to destroying so much else. Nothing such people say is ever worth remembering. Read Williams' lines and think of that toxic phrase "fake news," and how dictators throughout the world are now using it. Wasn't the plague now devastating our societies branded for weeks as fake news by Trump, Bolsonaro and all the other little Trumps  throughout the world?

But sometimes words are put together in a particular order that can outlast many lifetimes, for example the words of Sappho or Akhmatova, Li Po or Rumi, or in his better moments a doctor from Paterson, New Jersey named William Carlos Williams.

Dr. Williams was fortunate in his friendships. He met Ezra Pound at Penn and forty years later led the fight to free the crazy/fascist poet from the mental hospital into which he was thrown in 1945. He was also a good friend of the poet H.D. (If you don't know her, you should.) And he was a friend and early mentor of the young Allen Ginsberg who grew up in Paterson.

Parallel with his lifelong career in medicine (he was chief of pediatrics at Passaic Hospital for decades) Williams was a major poetic innovator whose style influenced many succeeding generation of poets. He focused on images  with a rare intensity, as in his well known The Red Wheelbarrow:


so much depends
upon

beside the white
chickens

Williams is associated with the early 20th century poetic movement known as Imagism and a line from his book-length poem Paterson is often cited: "No ideas but in things." In fact, Williams was not so interested in ideologies or abstractions of any kind. Practicing medicine probably intensified his focus on actual physical reality and he admitted he had no patience for the very intellectual style of his far better known contemporary T.S. Eliot, author of The Wasteland.

In 1923 he published a collection entitled Spring and All, which gained considerable recognition, and he continued to publish through the following decades. I like the simplest ones best, such as this poem that could be found taped to your refrigerator:

This is Just to Say

I have eaten
the plums
that were in
the icebox

and which
you were probably saving
for breakfast.

Forgive me
they were delicious
so sweet
and so cold

Williams was not all sweetness and light. He was clearly unhappy with his wife but he stayed married, writing love poems to her and to all the women with whom he had affairs. Picture the poet/doctor in this poem:

If when my wife is sleeping
and the baby and Kathleen
are sleeping
and the sun is a flame-white disc
in silken mists above shining trees,
if I in my north room
dance naked, grotesquely
before my mirror
waving my shirt round my head
and singing softly to myself:
"I am lonely, lonely
I was born to be lonely,
I am best so!"
If I admire my arms, my face,
my shoulders, flanks, buttocks,
against the yellow drawn shades,

Who shall say I am not
the happy genius of my household?

Not everything he wrote was great. He was not Akhmatova whom I can read over and over, finding something new every time. I have never been able to get more than a few pages into the book-length Paterson, of which he was so proud. He was no Sappho whose every fragment evokes visions from the imagination. Much of Williams' stuff just goes on and on and on. Why then do I take the time to read him, especially now? It is because of the conflicted love poems that he never stopped writing even at eighty when he was near death after a stroke and a heart attack. That's when he wrote the long poem from which I took the quote about news and poetry. Here's some others;

We danced
in our minds
and read a book together.
You remember?
It was a serious book.

It is ridiculous
What airs we put on
to seem profound
while our hearts
gasp dying
for want of love.


Here's some lines from his poem Rain:


Unworldly love
that has no hope
of the world

and that
cannot change the world
to its delight


and from his Ivy Crown:

Daffodil time
is past. This is
summer. summer!

the heart says,
and not even the full of it.
No doubts

are permitted -
though they will come
and may

before our time
overwhelm us.
We are only mortal

but being mortal
can defy our fate.
We may

by an outside chance
even win! We do not
look to see

jonquils and violets
come again
but there they are,

Williams' experimenting with stepped-down lines can seem dated, and at times confusing. He could simply write too much that is forgettable.  And yet, and yet are still jewels to be found in his poetry, as there are in the poetry of his friend, the great fool Ezra Pound. More on him later. 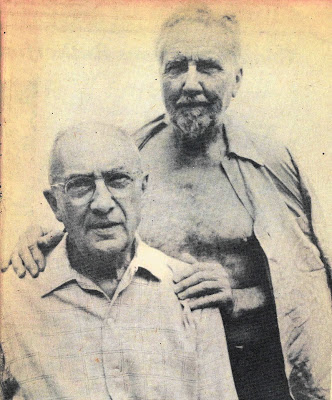 Williams and Pound in old age

Both Pound and Williams appear in my novel, In the Forest of Tombolo