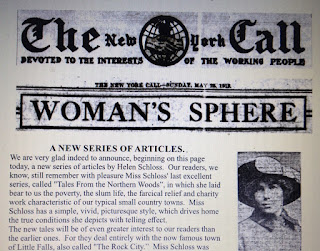 Thanks to the efforts of Little Falls native Bill Simpson, a series of thirteen articles by the public health nurse and labor activist Helen Schloss is being made available at low cost, or free, to the public. Bill is the great-grandson of Irving Stacey who founded the Little Falls Felt Shoe Company in 1905.

Writing for The New York Call in 1913, Schloss describes the horrendous conditions then existing in the working class slums of the town. At that time Little Falls was home to at least twice its present population, with foreign-born immigrants from Italy and Eastern Europe living in extremely crowded housing on the south side of the Mohawk River, which was itself literally an open sewer. Not only did industrial waste flow unchecked into the river but toilets were located directly over the water in many cases. Workers slept in shifts in the slums and small children did piece work for the mills in their living quarters. Schloss decries the wasteful spending of the rich mill owners on the new YMCA on Jackson Street while mothers died of untreated infections on the other side of town. She was particularly affected by the fate of a small girl who fell to her death in a terribly crowded tenement.

The Russian-born Schloss came to Little Falls in April of 1912, was hired by a group of wealthy women to address the ongoing tuberculosis epidemic among the poor. She soon developed a disdain for “the good ladies” when her struggle for better housing and safer working conditions met with obstruction from their husbands. She describes her discouragement as she realizes that the workers simply cannot follow her advice on how to avoid disease., and felt that she had become only “a fad for the ladies.” By the time strike spontaneously broke out that Fall, she was isolated from both her wealthy employers and the poor whom she was so desperate to help. Shocked by Police Chief Long’s observation that all of the strikers “ought to be shot,” she helps to organize a soup kitchen, only to be jailed for inciting to riot. After two weeks in the Herkimer County lock-up, she returns to the battle which finally ended in January, 1913 with modest pay increases for the strikers. 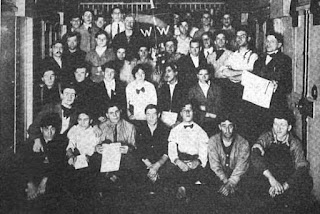 Helen Schloss and the Little Falls strikers in jail
The articles which the young nurse wrote for the socialist newspaper provide a very individual look at the life of factory workers of a century ago. Helen Schloss is quite candid about her own doubts and weaknesses while offering very vivid descriptions of the people and environments she encounters. She later went on to join the labor battles in Paterson, New Jersey and Ludlow, Colorado. The last record of her is from 1919 when she went to Bolshevik Russia as part of a Quaker medical mission.

The Helen Schloss who appears in her own words is, in my view, only slightly different from the version of her I imagined in my 1912 novel of the strike, The Red Nurse. Her stay in the Herkimer County jail was much longer – two weeks- than I described it in the novel. If anything, she downplays her leadership role in these pages, failing to mention her part in the speaking tour with Big Bill Haywood which is well documented elsewhere.

Interestingly, she also fails to mention the key role of the other female strike leader. Matilda Rabinowitz, who similarly did not mention Helen in her own narrative, included as an appendix to The Red Nurse. The two young women were the same age, were both Russian Jewish immigrants, shared similar politics, and both went on to other labor battles of the era – but perhaps they had some kind of rivalry or simply did not get along.

The paperback version of “Tales from the Rock City” is available at cost, $4.00, and the PDF is a free download. 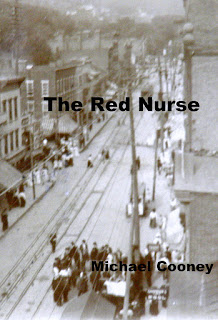 My fictional version of the same events in The Red Nurse  is available at Wilderness Hill Books and Amazon paperback and kindle. 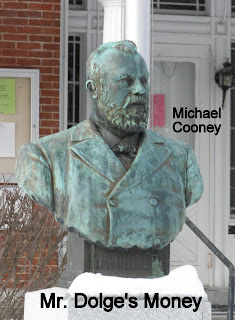 A much more fictionalized version of Helen also appears  in Mr. Dolge's Money, published this month on Amazon kindle. After fighting in the IWW battles at Paterson, New Jersey and Ludlow, Colorado, Helen joined a Quaker medical mission to Russia in 1919 and there is no  record of her after that point - In this novel she is imagined as finding a new career as a Comintern agent whose humanity soon marks her as an enemy of the Bolsheviks who so quickly subverted the socialist dream.

Posted by Michael Cooney at 6:55 AM