A Visit to Steepletop, home of Edna St. Vincent Millay 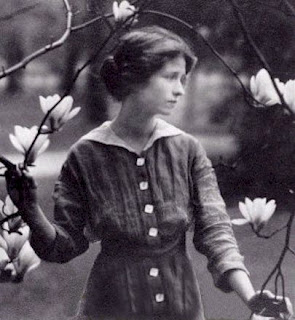 When we read in the Albany Times Union that Edna St. Vincent Millay's home was now open to the public, we decided that we had to visit. Located in the Harvey Mountain State Forest, Millay's farmhouse home can be reached by taking a dirt road just south of the intersection of NY state routes 22 and 203 in eastern Columbia county. 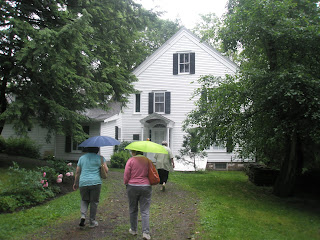 Visitors approaching the shrine
Edna St. Vincent Millay, or Vincent as she liked to be called, was "a rock star of her day and very much a diva," according to Peter Bergman, director of the Millay Society. The society's many volunteers have worked hard to restore the house and grounds and provide very informative and candid tours of the house.
Vincent , after living  in Paris and Greenwich Village, bought this former blueberry farm  and an additional 400 acres in 1925 for $9000. The poet and her husband Eugen Boissevain enjoyed company and had frequent visitors from the literary world of the 1920s and 1930s. 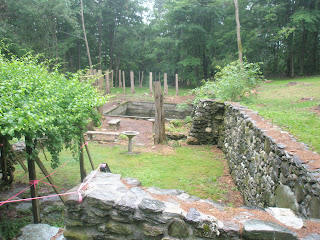 View of Vincent's pool, where skinny-dipping was mandatory 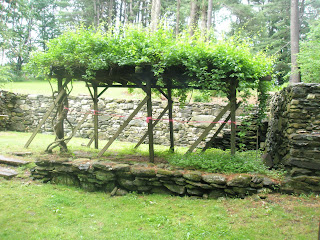 Restored arbor, where Vincent's poolside bar was located
When not entertaining, Vincent insisted on a strict schedule for her writing. In warm weather, she repaired to her writer's hut and was not to be disturbed. 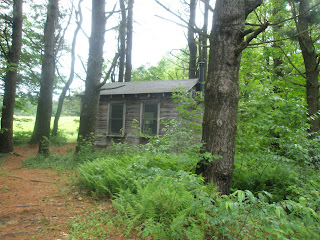 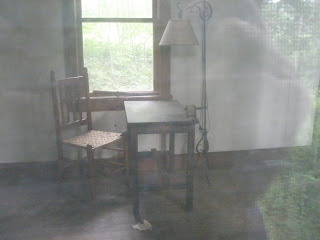 Interior of writer's hut
Eugen was extremely, some would say pathologically, devoted to Vincent. He not only served her breakfast in bed- he also vacated the bedroom whenever Vincent needed to entertain lovers of either sex. 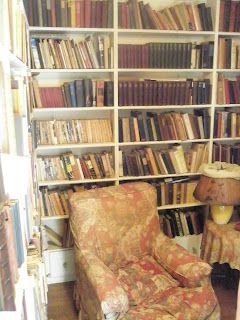 The study, where Vincent was not to be disturbed 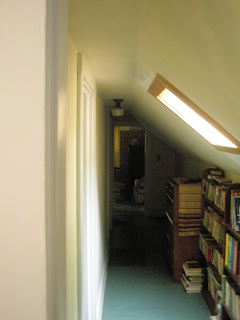 The tiny bedroom to which Eugen was banished when
Vincent's lovers came to call
Vincent's poetry, which followed traditional rhyme and meter in contrast to Eliot, Pound, Auden and the other poets of her era, was popular and she made frequent tours promoting her books and giving readings. Eugen and the servants continued to wait on her until he died in 1949.  Vincent was lost without her devoted spouse and evidently her drinking and drug use, always a problem, increased.  In 1950, while climbing the narrow staircase with a glass of wine in hand, Vincent fell to her death. 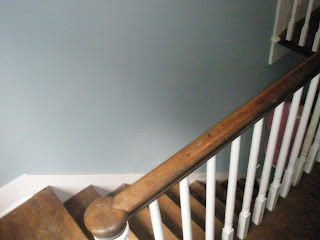 The fatal staircase: The rung on far right broke as Vincent grabbed
for it before tumbling to her death
Following Vincent's death, her sister Nora Millay Ellis and her husband continued Eugen's tradition of devotion to Vincent, or in this case to her memory. They kept the house unchanged for the next quarter century. On Nora's death, Vincent's youngest sister Norma donated the property to the Millay Society, whose volunteers  set about the challenging task of restoring the house and grounds. The sisters also donated 250 acres to the adjacent Millay Colony for the Arts, a retreat for artists.
A quarter mile up the road from Steepletop can be found the Millay Poetry Trail, which leads a half mile through the forest to the graves of Vincent and Eugen. 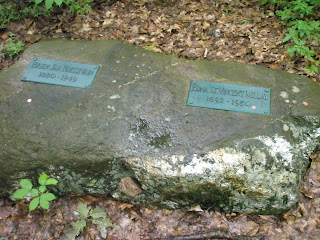 A few of her poems:

I shall forget you presently, my dear

I SHALL forget you presently, my dear,
So make the most of this, your little day,
Your little month, your little half a year,
Ere I forget, or die, or move away,
And we are done forever; by and by
I shall forget you, as I said, but now,
If you entreat me with your loveliest lie
I will protest you with my favourite vow.
I would indeed that love were longer-lived,
And oaths were not so brittle as they are,
But so it is, and nature has contrived
To struggle on without a break thus far, --
Whether or not we find what we are seeking
Is idle, biologically speaking.

For more on Vincent's life, the best source is the 2001 biography, Savage Beauty by  Nancy Milford. 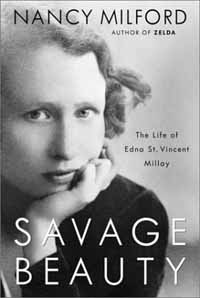 Posted by Michael Cooney at 2:59 PM