The Ghosts of Beardslees Mills 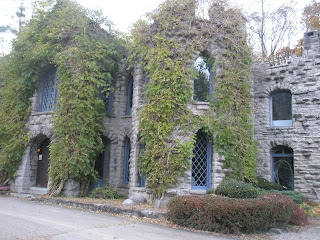 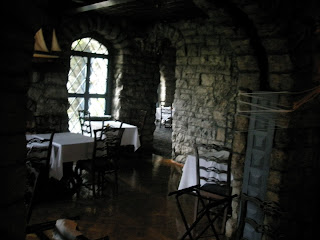 Beardslee Castle is a fine restaurant and wedding venue along route 5 between Little Falls and St. Johnsville, New York. It is also widely believed to be one of the most haunted places in the state. The resident spirits of the old castle were featured last Halloween on the Science Fiction Channel, and ten years earlier on the History Channel. And the voices of the spirits and their wispy images can be found on You Tube.


The restaurant’s Facebook page contains mysterious images of the many entities that have been seen, heard and felt within the castle: 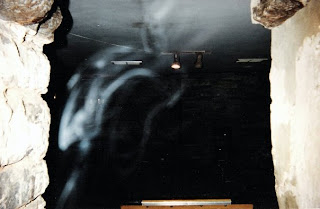 One of the earliest images I have is that of a ghostly boy from 1955, who rises up behind a gravestone in an abandoned cemetery a mile north of Beardslee Castle. 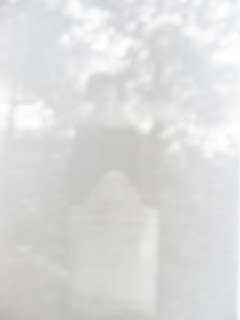 As October 31 neared, I determined to visit this haunted region once again. Arriving at the castle I found busy preparations for this year’s Halloween gala, but experienced no unusual sense of chill or dread. Undeterred, I proceeded up a gravel road that parallels the East Canada Creek just east of the Castle. 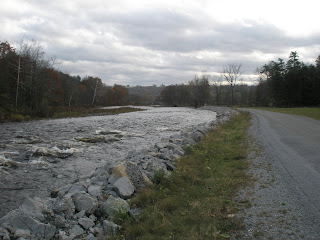 It was on this very road that an old friend of mine, Pete Murphy, ran his car full of teenagers into a ditch after sighting a mysterious ghostly man carrying a lantern. I saw him right afterwards and he was definitely shaken by the experience. He said that the light veered directly at his car, blinding him and forcing him off the road. Such incidents have been reported many times over the years. 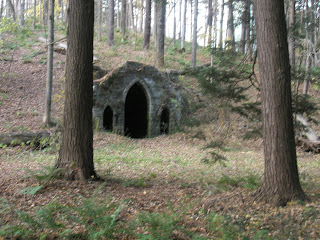 Passing across a corn field and into the woods beyond, I approached the old Beardslee Mausoleum, empty now as it has been for decades. I remembered the mausoleum as it was many years ago. The walls were lined with marble sarcophagi and the door was of iron bars. At some point in the 1960s, the teenagers who were drawn here by ghost stories broke into the mausoleum and desecrated the graves of the Beardslee family. 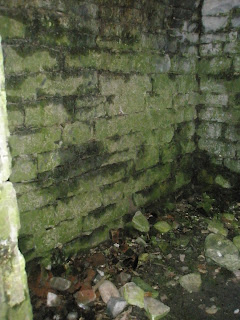 The mausoleum's interior is filled with empty bottles and the charred remains of old fires. An acquaintance of my father’s, Jean Marie Parsons, had some connection to the Beardslees and was outraged by the treatment of the dead. It was she who arranged for the scattered bones to be reinterred in the Little Falls Cemetery on West Monroe Street. It would seem that their spirits are now at rest but perhaps Guy, Augustus and the others are still annoyed, or at least restless, after such a disturbing interrruption of their eternal sleep. 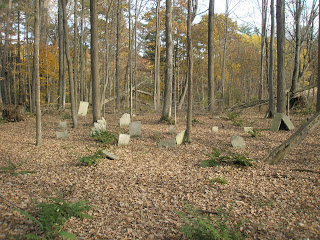 In the same woods as the mausoleum is a small cemetery, the only trace of the larger story of the Beardslees. The graves date from 1825 to 1850, well before the castle was built around 1860, and like many cemeteries of that era, many infants and children were memorialized here by their grieving parents. 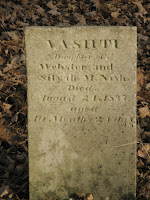 Those resting here were almost certainly residents of Beardslees Mills, a long forgotten village that grew up around the mills built by Augustus Beardslee on the East Canada Creek in the early decades of the 19th century. With the coming of the Erie Canal in 1825, commerce shifted away toward Little Falls, which boasted both waterpower for mills and access to the canal for shipment of manufactured products. I cannot be sure when the village was abandoned but its location was somewhere beneath the reservoir that backs up behind the nearby dam.

Although their village faded away, the wealth and influence of the Beardslee family did not, as evidenced by the building of their mansion, patterned after an Irish castle, many decades later. Guy Beardslee, a West Point graduate and grandson of Augustus, is said to have been a major owner of the New York Central railroad who had his own train stop near the mansion. It was Guy who first developed the waterfalls as a hydroelectric source, selling electricity to St. Johnsville and other local customers, beginning in 1898. Guy also commanded the local Home Guard, a predecessor of the National Guard, which was disarmed in the early 20th century after a drunken spree which involved the murder of several cows near Camp Jolly. (Much of this history was featured in a presentation at the Herkimer County Historical Society in 2001 by Betsy Voorhees) 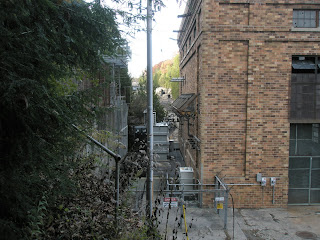 Just beyond the mausoleum is a good view of the National Grid (originally Niagara Mohawk) hydroelectric plant, and beyond it the ruins of the early Beardslee mill. The site is now completely fenced off, as are the glacial era potholes that were once the scene of much partying and skinny-dipping decades ago. 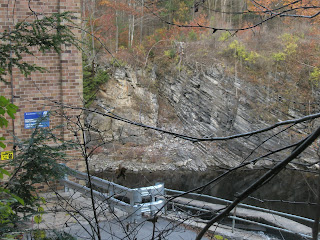 Directly across from the power plant is the filled-in entrance of what was once a silver mine, whose history is quite obscure. In a 1928 article Guy Beardslee shared reminiscences of the mine, which evidently contained lead as well as silver, but which never proved profitable. The entrance was open in my boyhood and my father told me of Mexican miners who had brought north to work the ore. However, I have been unable to find any corroboration of that story. Perhaps it is their ghosts who seek to make themselves known, but I have not heard that any of disembodied voices speak Spanish. 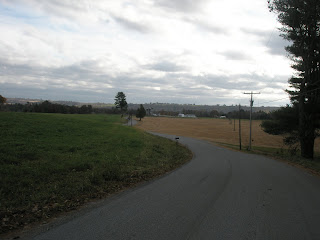 Thinking of the lost village, I set out to find a good access point to the very sizeable lake beneath which it lies. Just east of the Castle, state route 5 crosses the East Canada Creek. Taking the first right onto Old State Road and then another right up Clay Hill Road leads to Beardslee Road. Following the dead end Beardslee Road will soon bring you to the Beardslee Reservoir Special Fishing Area. 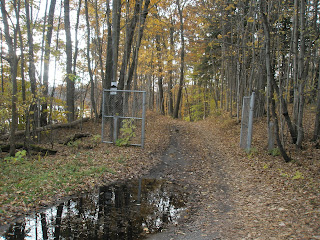 On a beautiful late October day this point of public land reaching out onto the lake is a magical place. The lake itself was deserted, not a boat nor a person in sight, an ideal place for quiet canoeing and kayaking. This point was a popular swimming hole that my brother and I enjoyed many years ago and has not changed at all. 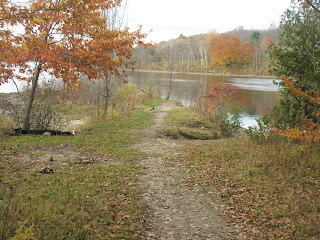 And out there, beneath the quiet water are the remains of a lost and forgotten village, whose spirits never seem to join the busy throng of revenants at Beardslee Castle.
Posted by Michael Cooney at 3:23 PM