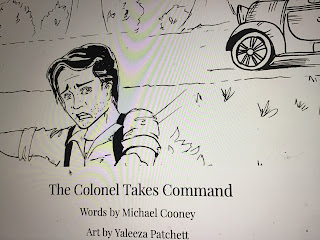 My story, inspired by the Mike Masco murder case in Little Falls a century ago, is now on line in Sundial Magazine, a new site for short historical fiction. The details of the homicide  and the method of concealing his wife's body are taken directly from the files of the Little Falls Historical Society. The manhunt is also based on fact, and Masco did flee to the area known as the Burnt Rocks east of town before he was apprehended. Chief Molloy and his son are based on local  figures whose identity would be obvious to the more ancient local inhabitants. Camp Jolly, the Home Guard, and the shooting of the cows are all taken directly from history.

Looking back at the story, my one regret is giving the Colonel the name of Guy Beardslee and I hope I have not troubled his spirit with my portrayal of the foolish old fellow bearing his name. The Colonel descended from the family who pioneered electricity development the county and built Beardslee's Mills, long since under the lake created by the dam at East Creek. The family's gothic mansion is now the well known Beardslee Castle restaurant on Route 5. (Photo below)

Sundial is a great new magazine and I urge your support. I particularly like A Part of Charlotte by Amy Goyan, a flash fiction which centers on an infamous device used to restrain patients at the State Asylum for Lunatics in Utica, New York.

I would also like to acknowledge the story illustration by Yaleeza Patchett.

For other Upstate Earth  posts related to the background of this fiction, see:

The Ghosts of Beardslees Mills

Tales From the Rock City

And this summary of a recent museum exhibit gives a good picture of Camp Jolly: 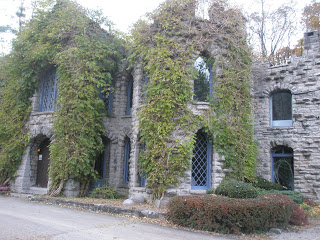