The Renegade Archaeologist & other tales 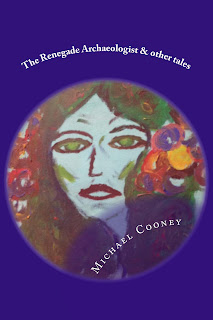 Newly available in paperback at Amazon and Lulu, this collection of three novelas and eight short stories ranges from distant star systems to an America only a few years in the future. Originally published in small SF magazines in the 1970s, the stories were influenced by anthropologists and  novelists I was reading at the time, such as Chagnon, Boas, Leguin, Tolkien, and Clarke . The forty year old manuscripts have been only slightly revised but seem, at least to this author, still relevant to the issues of the present.

The title novela, “The Renegade Archaeologist,” is composed of various documents from 90,000 years in future, after global warming provokes an ice age and diverts human evolution in divergent directions. The protagonist is inspired by a form of Christianity that reveres an ancient saint, Tayyard de Chardin, although the prevailing ideology denies both climate change and evolution.  In other parts of the continent new beliefs have accompanied the rise of new species of humanity.

The second novela, "The Monkey Men of Drimmold,"  focuses on an anthropologist who faces opposition to his claim that a peaceful species resembling spider monkeys is truly part of the aggressive pananthropoid family that has spread across the galaxy. After many months with the tiny hominids, he believes that the possession of fire, use tools, and capacity for violence are not essential to a human identity.

"Sole Surviving Victim," originally published separately as "Conflagration 1793," is a story of time travel. Three African teenagers are the victims of a drive-by shooting in present day Albany and are transported back to the era of Northern slavery that followed the  American Revolution. Dinah, the only one of the three to recall their 21st century life, struggles to prevent a violent uprising that she fears will lead only to slaughter.

"Speaking in Tongues" describes an evangelical Christian dictatorship, which I originally wrote before Margaret Atwood’s Handmaids Tale. "The End of the Fourth World" is  an apocalyptic tale inspired by Hopi myth myth. In "The Wizard, The Knight and the Daughter of a God," a space traveler named Jack Murphy is worshiped as a god on a distant planet. When he disappears, a wizard and a knight set out in search of him.

"Gullrider of Mund" is about a brave young woman who tries desperately to save a doomed human colony where all technology is based on the control of giant sea creatures. In "Long Toes," the last man on earth has never met another human being and in "aboard the Saint Jude Thaddeus," a starship commander begins to question his loyalty to the Vatican. "In the Time of the Honchos" is set in a devastated future that may remind some readers of the Mad Max movies - minus the machinery.

In a more recently written story, "You Don't Need a Weatherman,"a retired couple adjust to an overheated world where climate denial is official policy, but are worrying about their rebellious grandson.

Posted by Michael Cooney at 6:41 AM