In keeping with the spirit of the times, I am releasing a short work of fiction uncovering the mysteries of our new president's first two years of college at Fordham University in the Bronx. 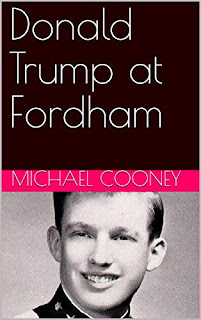 
Now that he’s president, people have a million questions about what Trump was like when I knew him, probably because he never talks about that part of his life. Everybody’s heard about the military school and how great he did at Wharton but not even a tweet about the two years he spent at Fordham.
Let’s start by turning the clock back to September fifty two years ago. I still have very vivid memories of those first days away from home, even of the weather which was beautiful, cool and crisp. Coming from a hick town, everything about being at college was so exciting for me that those days are clearer in my mind than some things that happened yesterday. I still can repeat almost word-for-word conversations I had with guys in the dorm, some of whom I am still friends with after all these years. Trump, I should tell you straight out, was not what either of us would have called a close friend but we definitely knew each other and we got along okay. The thing is that he was in the business school and I was in liberal arts so we didn’t have classes together, except once or twice. Plus, he commuted every day from his parents’ house in Queens.


I wouldn’t have met Don, as he introduced himself, if I hadn’t let my father pressure me into joining the Army ROTC. My older brother had such a hard time after being drafted that the one thing my Dad insisted on was that I should be an officer.  So I sign up for ROTC when I register in the gym for all my other classes and a couple days later I go to the first “formation” and discover the whole deal sucks. Upper class guys who think they’re in West Point line us up on Edwards Field and begin yelling about what slobs and maggots we are. They make us march around and have a good yuk as we stumble every which way. Here I am thinking what an asshole I must look like to the Thomas More girls who are passing by in plaid skirts and with their arms full of books.
I first noticed Trump at the second formation when we were all wearing surplus WW II uniforms and doing the right-face, left-face routine. How could I not notice him? The student captain, who later got his legs blown off in Nam, was chewing me out for the state of my shoes and brass buttons. “Did you shit on these buttons, Ryan?” he yells in my face, complete with a serious case of halitosis. “No sir, sir!” I blurt like I got no balls whatsoever and he asks am I fucking with him and I say no sir, sir no etc.
But when the little jerk, Donnelly I think his name was, gets to this big guy down the line from me, he does a complete 180. He tells the guy to step forward six paces, about-face about-face until he is facing us. “This man is what a soldier should look like, you maggots! Observe the brass. Observe the shoes. See how they shine?” I nod like a schmuck, as do the other schmucks to my right and left.
Then Donnelly calls out the whole manual of arms and the big guy goes through all the moves like he was a perfect robot soldier, forward march, attention, at ease etc. Donnelly decides to criticize one thing, I think it was how his shirt fit into his pants, and the big guy gets this frown which will be familiar to anyone who has seen Trump on The Apprentice or running for president. He looks like he’s about to take the little captain's head off so the guy backs off and begins berating somebody else. I didn’t catch Trump’s name at that point and I wasn’t sure what to make of him


To read more about how the young entrepreneur Don Trump broke all the rules on his way to Wharton, read "Donald Trump at Fordham" for only 99 cents at Amazon Kindle.