Neither Rebel Nor Tory: Free promotion this week 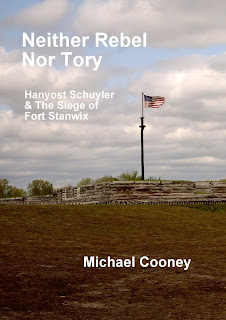 To mark the 238th anniversary of the Battle of Oriskany this week, my 2007 novel of the events surrounding the battle will be offered as a free promotion from August 4-8, 2015.
As the fires of revolution broke out in 1775, the largely German settlers in the valley were among the strongest supporters of independence. Nicholas Herkimer, a wealthy landowner living near Little Falls, emerged as the leader of the local militia.  Even before independence was offically declared, the patriots had driven off to Canada hundreds of those who chose to side with King George III, including the powerful Johnson family.
In this emerging civil war, many families were split between loyalty to the King and the Republic proclaimed only a year earlier in Philadelphia, and this included Herkimer's own family. His brother Johann had joined the Tories and his nephew Hanyost (or Hon Yost)Schuyler was accused of treason and sentenced to be hanged.
My vision of Hanyost Schuyler, only 21 in 1777, is that his upbringing among the Mohawks near Little Falls gave him a deep affinity with native culture that made him resist taking part in the war on any side. Trapped in the middle of a battle he did not choose, Hanyost was uniquely placed to do what his uncle and no military force alone could do.
In my depiction, Hanyost is neither a traitor nor fool, but an intelligent young man with a profound knowledge of the Mohawk culture. It is this that gives the credibility to persuade the invaders that they will soon face a far larger force that the one actually assembled by Benedict Arnold at Fort Dayton. (present day Herkimer New York) In contrast to his neighbors, Hanyost is free from any taint of racism toward the original inhabitants and prefers their company to that of his fellow Palatine Germans. He is particularly close to the Mohawk girl, Ataentsic and her brother, Onatah.

In the summer of 1777, the royal government was eager to destroy the republic, planned an invasion that would bring the Tories and their Iroquois allies back into the valley in order to wreak a bloody vengeance. At the same time, a powerful force of British regulars under General John Burgoyne drove south from Montreal toward Albany.

Only a single fort protected the valley from the second force of invaders who would follow water routes south from the British base at Oswego, and that was the dilapidated Fort Stanwix. 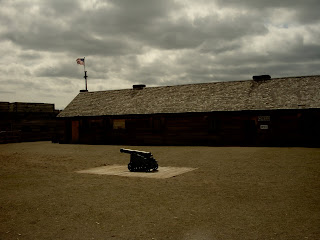 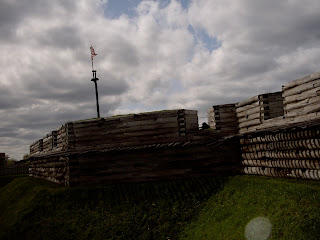 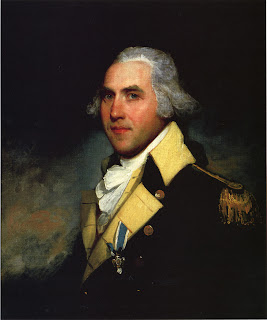 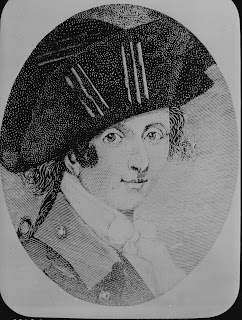 Barry St. Leger, a career officer in the British army, was promoted to general for purposes of the expedition he led south from Canada in July, 1777 as one prong of a triple attack designed to split and destroy the new American republic. A second prong, to be launched from occupied New York City, never took place, due to either to the British commander's lethargy or to a communications failure. The main force of 8000 troops, led south from Montreal by General James Burgoyne, was defeated at Saratoga a couple months after the events at Stanwix and Oriskany. American victory, and the independence it protected, may well have been due to the ignominious retreat of St. Leger from Fort Stanwix. But  this eventual victory was nowhere in sight as the mixed force of British soldiers, colonials who had joined the royal side, and a large force of allied Mohawk and Seneca warriors surrounded the fort. 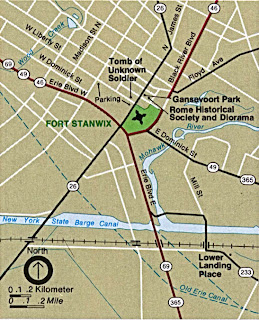 Now at the center of the small city of Rome, the site of Fort Stanwix controlled the strategic point where the Mohawk River was only a couple miles from Wood Creek which led to Oneida Lake and other waterways  to the west.  The fort was built twenty years earlier duing the war with the French, but had fallen into disrepair by the time the Revolution broke out. Gansevoort and his force had made only partial repairs and had limited artillery when the British and their allies arrived from the west in late July.

The British had relied on small boats to carry them up the Black River from their gathering point at Oswego, down to Oneida Lake and up Wood Creek, now a small rivulet visible from bridges on West Dominick and West Liberty Streets. Gansevoort directed his men to fill in the Wood Creek channel with logs and debris, to block St. Leger's ability to bring up his artillery and heavier supplies. Despite these delaying tactics, Gansevoort's troops, along with many women and children, were soon surrounded in the fort, and fearful that they could not long withstand the siege. The murder and scalping of two girls as they gathered berries near the fort in the days before the battle,  let the besieged know that surrender was not an option. 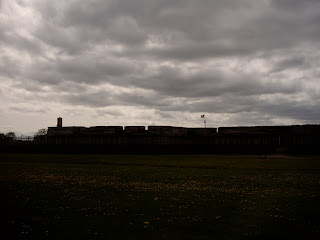 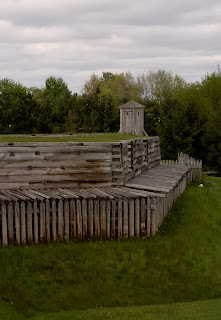 Bastion of the fort, with sentry box

As the siege continued, Colonel Gansevoort sent out desperate appeals for help. With the new American Army under General Washington far to the south, only the local militia was able to respond. Assembling under  Nicholas Herkimer at Fort Dayton (now Herkimer, NY) this force of about a thousand men, joined by allies from the Oneida Nation, set off to rescue their countrymen. The amateur nature of this brave force was nowhere more evident than their rapid advance straight into a trap. 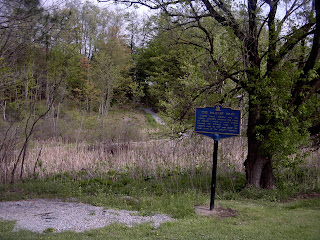 On the morning of August 6, 1777, the militia were six miles east of the fort in a thick primeval forest that covered an area of low rises and ravines along the south bank of the Mohawk River, now accessible from state route 69 between Rome and Utica. As the militia trudged along a track in the woods, called the military road, they reached a ravine. Herkimer reportedly wanted to send out flanking scouts but was stung by accusations of cowardice from his unruly troops, eager to press on to Fort Stanwix. These accusations were sharpened by the fact that Herkimer's own brother Johann had joined the Tory(or Loyalist) Americans who comprised a large part of the force besieging Stanwix.

Whatever the reason, Herkimer led his men straight into the ravine where a mixed force of Tories and their Iroquois allies lay in ambush, under the leadership of Herkimer's former neighbor, the Mohawk war chief known to the whites as Joseph Brant. In the first volley Herkimer's leg was smashed and the militia suffered fearful losses. Retreating to a low rise above the ravine, Herkimer directed his men to form a circle and fight back. (Caught in the middle of the battle, Hanyost is finally forced to choose sides, relying on the Mohawk bow that is his only weapon.)
After a day of continuous battle amid the ancient trees, the American lost anywhere from 500 to 700 of their original force, their enemies considerably less. The militia retreated back to present day Herkimer, NY while St. Leger continued the siege. 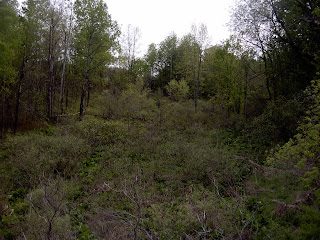 The ravine where the militia was ambushed 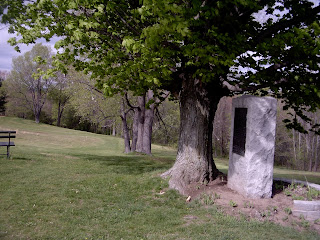 The site from which Herkimer directed the battle 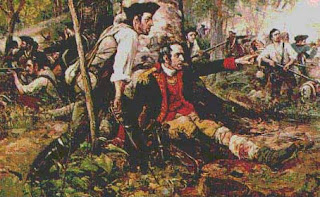 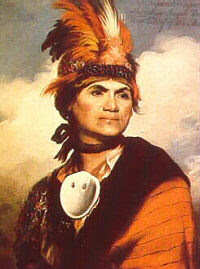 As the battered militia retreated from the scene of battle on the evening of August 4, 1777, the survivors must have feared that their struggle for independence was a futile and doomed effort. The only armed force protecting the settlements of the Mohawk Valley was now shattered, and Herkimer himself died of his wounds shortly after the battle. The only regular U.S. troops anywhere near were dug in near present day Saratoga, awaiting the advance of a formidable force of regular British soldiers and hired Hessian mercenaries, and under the command of General Philip Schuyler.

The defenders of Fort Stanwix, running low on food and ammunition, could not hold out for long and when the fort fell, St. Leger would surely unleash his allies on the unprotected settlements, stretchng east from near present day Utica to Schenectady. And the British would be free to attack the Continental army from two directions at once. The rich farmlands of the valley, which provided much of the food for Washington's army, would be in enemy hands, and defeat  of the independence movement would be only a matter of time. Britain's "counterinsurgency strategy" would have paid off.

What prevented this disaster? What saved our young republic from perishing only a year after its independence was proclaimed? For one answer, I recommend that you read Neither Rebel Nor Tory, free this week and $2.99 after the promotion ends on Thursday. (A paperback version is also available onAmazon for $19.99) As always, reader reactions are welcome at wildernesshill@gmail.com.

Posted by Michael Cooney at 8:47 AM