The enlightened capitalism of Alfred Dolge 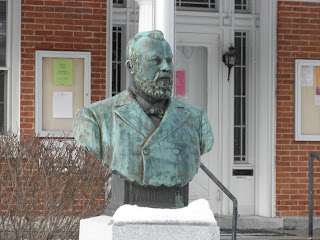 Bust of Alfred Dolge at the Dolgeville Village Hall

Clearly, the socialists and anarchists who led the Little Falls strike in 1912 cannot offer a model for restoring prosperity to our region.  The Russian revolution of 1917 forever branded socialism as a dangerous form of tyranny in the minds of most Americans. And even now, a century later, calling the current president’s health care policy “socialist” is a sure way to discredit it in the minds of many citizens.  Even if a more rational and cooperative organization of the economy could help us, a majority of the people will simply not accept this possibility.

But unrestrained free market capitalism has spelled economic disaster for Upstate New York, and the current bipartisan enthusiasm for cutting taxes on the wealthy is only a recipe for ever-greater inequity. Perhaps, then, it is time to look to our past for solutions that combine a for-profit system with a reasonable concern for the well-being of working people. And that brings to mind the long forgotten Alfred Dolge.

Dolge was no socialist, but he believed that the health and well-being of his workers was the necessary foundation for his own prosperity. An industrialist and founder of the village that bears his name, he had read both Karl Marx and Adam Smith as a young man in Germany, and combined those two apparently contradictory thinkers in his own unique vision. 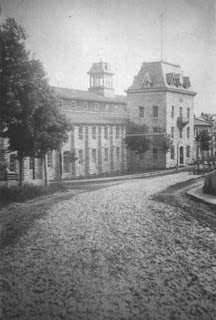 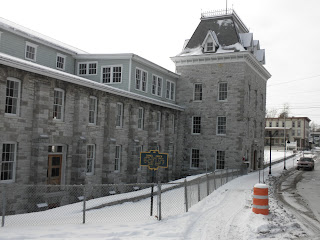 The industrialist came to New York City as a young man, having apprenticed as a piano-maker in Germany. At first specializing in the import of felts and wires for the manufacture of pianos, he decided to create his own industrial village for the production of the piano components he had been importing. After an extensive search though the north east, he settled in 1875 on what was then the tiny hamlet of   Brocketts Bridge because the East Canada Creek offered both water power for his machinery and the water quality needed for washing felt.

He kept his large shop on 13th street in Manhattan and commuted by the night train each week, walking the final six miles from the depot in Little Falls before he built his own railway in 1892. Starting operations in an old tannery, he was soon at work on the beautiful limestone factory that is still the heart of the village, drawing skilled craftsmen and their families, many from Germany.

As his work force grew into the hundreds, Dolge initiated a profit-sharing system for his employees, providing for disability payments, life insurance and an old age pension in 1876.  Bismarck sought his advice when Germany developed the world’s first social security plan, and the Social Security Administration recognizes Dolge’s role as a forerunner of today’s system. 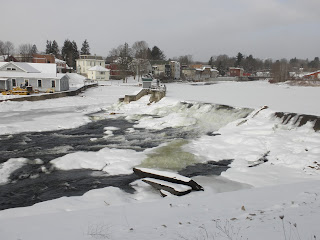 Intake for recently restored hydroelectric generator
at the Dolgeville Mill

He was an admirer of Thomas Edison and put into operation the first electric dynamo run by waterpower in 1879,  which provided electric lighting for his mills, later extending it to the entire village.  Dolge also bought land for a park which he gave to the village, and donated a school and community club house. 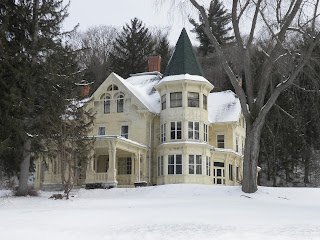 Alfred Dolge enjoyed his wealth and built a mansion just across the East Canada Creek from his factories. He was always a workman at heart and spent much of the day on the factory floor, but he was also a great reader and writer. He spoke widely and wrote on subjects ranging from education and physical fitness to socialism and the protective tariff. (He saw the tariff as an absolutely essential way to protect his workers from unfair competition by low wage workers overseas – a position that no modern politician is willing to take.) 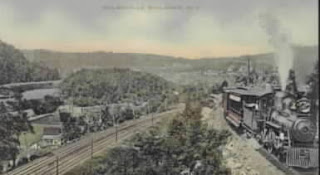 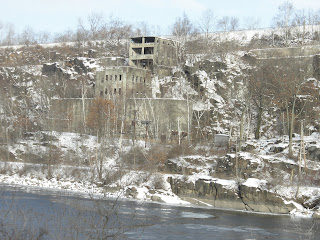 view of the same section of the abandoned railway today

Curious about traces of the utopian society created by Dolge, we followed the wintry roads north from Little Falls to Dolgeville, roughly parallel to the route of the Little Falls & Dolgeville Railroad, which was sold for scrap in 1964.

Arriving in Dolgeville, we located the Founder’s bust in front of the Village Hall and headed for the complex of factories built by Dolge in 1882, and later home to Daniel Green Felt Shoe Company until it shifted production out of town in 1999.  There we found Charlie Soukup, hard at work sanding the floors of the old mill. 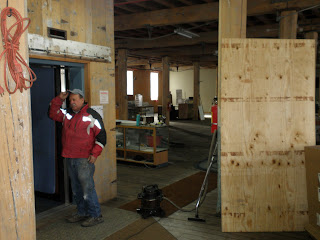 Charlie came from Florida to buy the 23 mill buildings several years ago.  After experimenting with an antiques center and a furniture store at the site, Charlie is now committed to creating at least 40 very original condominium apartments in the main mill building. I couldn’t help but compare him to that other entrepreneur who came here inspired by his own unique vision 140 years ago. 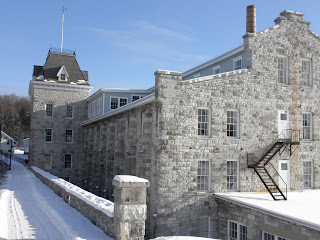 40 condos are planned for the main mill

Charlie  interrupted his work to take us on a tour of the structure. He pointed out many examples of the great craftsmanship shown in the construction of the mill as evidence of Dolge’s extreme attention to the details of quality control. He told us that Dolge kept very detailed records of every aspect of the mill’s construction and operation. 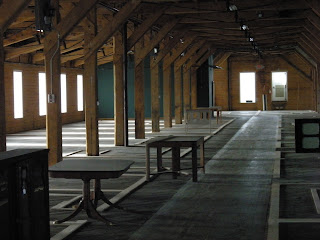 Layout for condo apartments on the mill's third floor 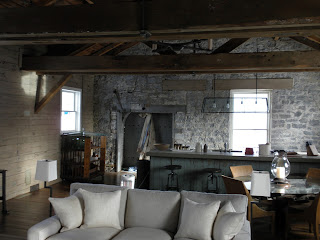 Charlie Soukup has made major investment in this project, hiring local people to clean out the old mill and ready it for renovation. The model condo which he recently completed is a remarkable example of creative use of vintage materials. The shelving and walk-in closet is constructed from lumber used at the mill. The handcrafted furniture also makes very effective use of old machine parts. And the view of the rushing creek is impressive. Although he plans to offer the one-bedroom unit for about $200,000, it would command well over a million dollars in New York or Boston.

Charlie said that he often wonders about what Dolge saw here so many years ago. Although I was eager to explore the issue, he didn’t want to speculate about whether it was Dolge’s own misjudgment or a conspiracy by his fellow capitalists that finally brought him down.  The risks of any great venture, then or now, are always high.

However, I do think that Dolgeville may well thrive in coming years, and I have high hopes for Mr. Soukups’ ambitious project. In contrast to most of the region, this village has not suffered excessively in the current economic downturn. Much of the local economy centers on the renewable resources of the Adirondack forest, and lumberyards and woodcraft industries remain strong.  The family-owned Rawlings company continues to produce the high quality Adirondack bats favored by so many major league baseball players. And just north of the village, a $200 million wind farm has recently gone into operation generating clean energy.

Adirondack bats are still made in Dolgeville 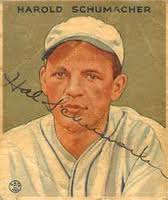 Dolgeville native Hal Schumacher pitched
for the New York Giants and was an executive
for the Rawlings company.

As to the nature of the society created by Alfred Dolge, its lessons for our own time, and the mysterious events surrounding  his downfall in 1898, that  will be the subject of a future posting on this site.

My novel on the later life of Alfred Dolge, Mr. Dolge's Money,  can be found on Amazon in paperback for $9.95 and on kindle for 99 cents. The story centers on Alfred and Anna's grandson Joseph, or Jose, who is imagined as a son of Rudolf's from Venezuela. At the very end of World War I. Alfred dispatches the young man on a mission across newly Bolshevik Russia into a Germany in the midst of its revolution. In the course of Joseph's attempts to recover his grandfather's hidden fortune, he narrowly escapes from both Lenin's secret police and the early Nazis and their followers from the occultist circles of Munich.

My  short factual biography of Alfred Dolge is also available on Kindle for 99 cents and as an illustrated paperback for $7.95. The Kindle version can  also be read on tablets,smartphones and PCs by downloading the free Kindle app. Amazon Prime members may also borrow the story through the Kindle Owners Lending Library.

Posted by Michael Cooney at 8:51 AM