Immigrants in the Hudson Valley and the Secure Communities Initiative

"A key immigration enforcement program that has drawn criticism from some state and local governments will terminate all existing agreements with jurisdictions over the program, federal authorities announced Friday.

Hard work by immigrant advocacy groups and countless individuals across the country has had its effect, but  ICE still needs to be monitored closely.

In contrast to the welcome shown to the Ziguang Shang Shi sect in Amsterdam, Latino migrants have not found our area particularly friendly. “It’s not just the weather that’s cold upstate,” according to Luz Marquez of Troy, who works with abused Spanish-speaking women. “It’s the people, too. Many of the women I work with are afraid to go to the police.” 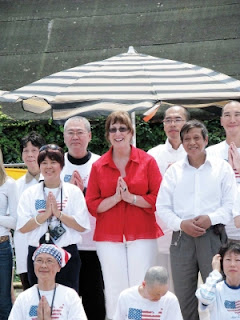 Amsterdam Mayor Ann Thane with
members of  the Ziguang Shang Shiu sect
The Ziguang sect has no such fear, and did not hesitate to demand more police action when their temple was vandalized, nor were they shy about calling in the state Department of Environmental Conservation to harass Art Popp, a maple syrup farmer whose occasional  presence on their land in Ephrata was objectionable to them.
Even somewhat prejudiced local people do speak well of the Ziguang sect, implying that they are more desirable than other recent non-Anglo arrivals. “They’re not out there committing crimes,” one man told me last month. And although the ample and unexplained financial resources of the sect do raise red flags, members of this group are not seeking employment that might go to  citizens and retailers are happy to take their money. 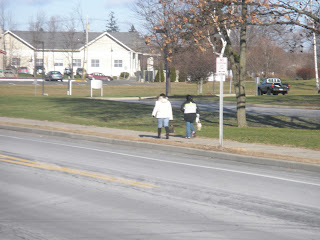 Migrants from Latin America frequently walk
long distances to work or shopping
In contrast, Latino people new to the area generally maintain a low profile and are not known for seeking attention. Too many English-speakers only hear of them when a crime is committed. Here in Columbia County, two incidents over the past year confirmed the unfortunate stereotype. In October, an illegal alien from Mexico named Luis Gomez Cruz  stabbed his wife and a male friend  in Valatie, and evaded arrest for two days. A year earlier Manuel Ramirez, an illegal alien from Guatemala, raped a woman jogging along a country road near Kinderhook, and was apprehended in Westchester county. 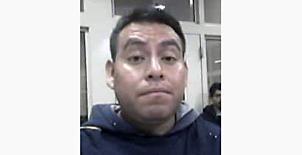 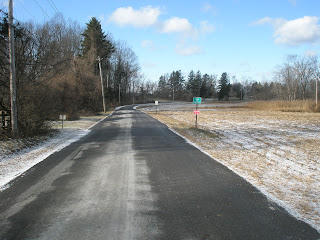 Manuel Ramirez, an illegal immigrant from Guatemala,
was arrested for raping a local woman jogging
along this quiet country road in Stuyvesant
No one wants people like these two in this country. That’s why the Department of Homeland Security’s  Secure Communities Initiative is apt to be greeted with enthusiasm locally, although the collaboration envisioned in the MOA signed by Governor Paterson has not yet taken effect.
Calls to the police departments in Troy, Albany, and Hudson last week revealed that officers in those departments had not yet received directives from the state for implementing the MOA. But a few Hudson Valley law enforcement agencies have already made a major commitment to immigration enforcement, and their experience  needs to be evaluated before the entire state commits to “Secure Communities.”  The Putnam County Sheriff’s Department proudly announces its collaboration with ICE on its website.
According to the Immigrants for America Foundation, based in a Schenectady law office, the Colonie Police Department has made immigration enforcement a top priority. They report that this prioritization is evident in a pattern of profiling in traffic stops and is resulting in many crimes going unreported by a fearful Latino community.  Since Colonie  has been named for two years running as the safest community for its size in the US, I wanted to get the department’s take on this.
I spoke with Lieutenant Robert Winn, who is in charge of criminal investigations. for the Colonie  Police Department He said that the department did not make immigration enforcement a priority but that they addressed it as a secondary matter in the course of other investigations. He was familiar with Secure Communities and said they were filling out the paperwork for that program, so apparently the state has, as of December 8, sent out instructions for the implementation of Paterson's MOA. He felt  that the federal initiative would not change the way Colonie PD operates in such cases.
I then asked Lt. Winn about a case reported to me by the Immigrants for America Foundation of a man who was defrauding vulnerable immigrants by means of bogus immigration documents. Lt. Winn said that the man in question was arrested in January of this year for that charge and that there was currently a warrant out on him for failure to appear. 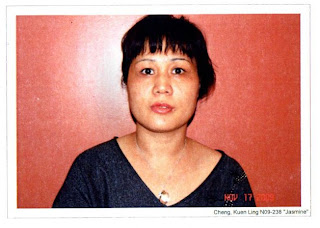 Kuen Ling Chen, at the time of her first arrest

In February Colonie police arrested  a ring of  immigrant women from China  for prostitution.  In the course of the investigation into two storefront massage parlors, the Jasmine Beauty and Massage at 1741 Central Ave. and  the Red Rose Massage Parlor, 644 Loudon Road, police apprehended the owner Kuen Ling Cheng  and five other women . Kuen, who was already facing charges from a previous prostitution bust four months earlier, reportedly recruited women through advertisements in Chinese-language newspapers in New York City. (a media source also popular with the Ziguang sect, and  often invisible to US law enforcement)


ICE was called in to determine immigration status. Although no minors were involved this time, there is always a strong possibility of coercion when women of uncertain immigration status are found in this kind of situation. Evidently, the case has been handled without any peremptory deportations, since Kuen and her crew were arrested today for the third time and on the same charges.


I spoke with the Workers Rights Law Center in Kingston and was told of a raid at Stewart Airport a year ago  in which 15  people from several Latin American countries were rounded up, based on a bogus terrorism tip, and held incommunicado by ICE and Orange County law enforcement officers.  However news reports at the time indicated that the 15 were using forged identification. Even so, they have still not been deported. According to the legal offices of Catholic Charities in New York City which is handling the defense, their cases are about to go before immigration court. Thus, it appears that ICE has not acted with the haste and disregard for individual rights suggested by  the Workers Rights Law Center and the Hudson Valley Community Coalition.
After considerable inquiry, I had no conclusive answers about the Secure Communities Initiative. However, incoming Governor Cuomo needs to carefully re-assess Governor Paterson’s agreement with Immigration and Customs Enforcement  to make sure that all appropriate  safeguards are in place so that this latest federal involvement in local law enforcement is done right and does not violate the rights of people we ought to welcome to our communities. 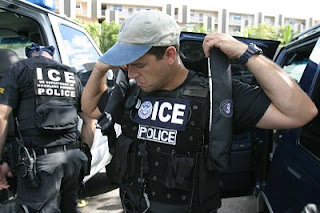 Jurisdictions where collaboration with ICE has already begun, such as Putnam and Orange Counties, should be studied closely to develop a model for partnership statewide. And the evidently successful work of the Colonie PD also needs to be  documented if only to refute the allegations of profiling by the Immigrants for America Foundation. Very possibly, that department's work could serve as a model for successful federal/local collaboration under the new initiative.

Email and phone contact during the transition between governors can be  problematic, and a written letter is, in my experience, most apt to be taken seriously:
Andrew Cuomo
Governor-Elect
State Capitol
Albany, NY 12224
Posted by Michael Cooney at 5:09 PM