People in Gloversville were puzzled by recent real estate purchases by unknown buyers of two large landmark buildings: The Schine Building and the YWCA.
My own curiosity about developments in Gloversville began when I was part of a conversation October 26 at the Five Buddhas Temple, formerly St. Casimir’s Catholic church in Amsterdam.  A member of the Christian congregation renting space in the YWCA had come to see Jennie Wong , spokesperson for the World Peace and Health Organization, to inquire if rumors that the WPHO was interested in the building were true. Jennie confirmed that the group led by Ziguang Shang Shi was indeed interested in the building. 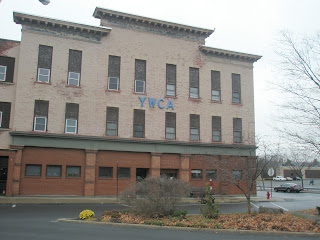 The YWCA, built in 1900, had been offered for sale at $400,000 and is now under contract for $120,000 to an undisclosed “out-of-town buyer,” according to Pyramid Realty, which is handling the sale.
This does not confirm, of course, that the WPHO is the mysterious buyer of the YWCA,  but I can’t help but wonder why anyone would be interested in such properties and yet take such care not to reveal their identity. Certainly, serious investments and renovations are much needed in downtown Gloversville, and any organization willing to make that commitment would be be welcomed and applauded. 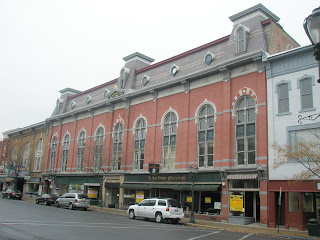 The 29,000 square foot Schine  Building, built in 1888 as Memorial Hall,was sold at a November 11  auction for $48,000 to an undisclosed buyer. Michael Teetz of Glove City Realty placed the winning bid on behalf of another party. Teetz wouldn't say who authorized his bids or identify future plans for the building, but he did say the World Peace and Health Organization was definitely not the buyer. So, this is one rumor can be laid to rest. (A reader of this site alerted us to a November 18 article in the Leader-Herald reporting that "the Gloversville Economic Development Corp., which oversees loans to businesses within the city, will add the 29,000-square-foot building to its properties.") 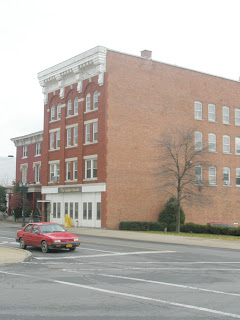 The Leader-Herald building in downtown Gloversville
Amanda Whistle in the Leader-Herald reports that:  “According to property tax map data, the building is owned by Memorial Hall, LLC. The prior owner was Covenhoven Realty Corp., which sold the building Feb. 12, 2007, for $225,000.”
A week before the sale, Whistle had written: “the winning bidder at auction will have the opportunity to apply for grant funding for restoration and renovation of downtown's historic centerpiece.” She explains  the details on the grant:
“Wally Hart, president of the Fulton County Regional Chamber of Commerce said there is still $175,000 left from the $200,000 awarded in 2008 through a historic preservation grant from the state Housing Trust Fund.
Each building on North Main Street is eligible for up to $50,000 for building renovation and $10,000 per building for facade restoration under a 50/50 matching format, Hart said. Because of the size of the Schine Building with its seven storefronts, it is eligible for up to $20,000 for facade restoration.”
A merchant in the Glove City Commons across the street from the Schine Building speculated that the building could become profitable as an inexpensive apartment rental “if somebody fixes the roof.”  He estimated that maintaining and heating the large structure would cost $6000 a month, which would cut into rental income. A young man who has done work in the old building agreed, saying that extensive repairs and renovation are necessary. 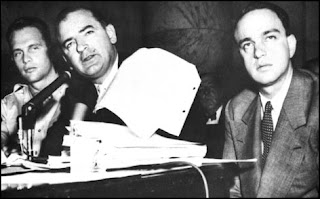 Gloversville native son G. David Schine
with Joe McCarthy and Roy Cohn
As of November 15, retail tenants in the Schine building had not yet heard from the new owners, and a tenant in the YWCA was still in the dark about that pending sale.  I spoke with several people on the street about the building and one lady reminded me that the Schine family had experienced a moment of notoriety back in the McCarthy era. In fact, it was a controversy over G. David Schine that finally discredited McCarthy. After a three years reign of terror, McCarthy ran into trouble when the Army charged that he and his aide Roy Cohn had employed undue pressure in an  effort to get an officer’s commission for Schine, who had been working for McCarthy & Cohn as an unpaid investigative aide before being drafted. McCarthy’s abusive questioning of the Secretary of the Army in the subsequent hearings is what finally led the Senate to censure him. Schine went on to a career as a Hollywood producer, making use of the family fortune that began here in Gloversville, and died in 1996.
Still without any idea of whether the WPHO was the mystery buyer of the YWCA, I headed west to Ephrata to take a look at a large property owned by the Ziguang group  since summer. 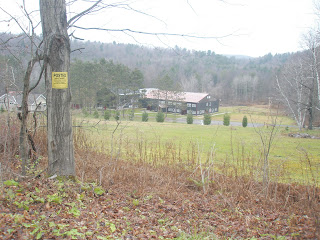 The long vacant Adirondack Center Camp on Hart Road in Ephrata, which includes 206 largely forested acres, was bought in August by the World Peace and Health Organization according to Edward Hunt in the Leader Herald:
“The group paid $400,000 for the site, which had been listed for $995,000, according to Gordon Enfield, principal broker with Carroll Enfield of Troy. Part of the difference was considered a donation to the group.
Jennie Wong, a representative for the group, referred all questions to its leader, Master Ziguang Shang Shi, who was unavailable.”
This response foretold later problems between the Ziguang group and local people. Again, Edward Hunt, writing in the Leader Herald on October 16, told of one completely avoidable conflict precipitated by the sect:
Concerned for the well-being of the trees on their newly bought property, the leader of a Buddhist organization has demanded that a local farmer's syrup taps be removed from the maples.
Master Ziguang Shang Shi and his Bhuddist followers of the World Peace and Health Organization said the syrup taps are damaging the trees on the 200-acre property on Hart Road the group purchased in August.
"They are placing nails in the trees," he said through an interpreter. "The nails are taking their life energy."
Art Popp, the farmer who planted the taps and who has been making maple syrup and farming in the area for 43 years, is quoted by Hunt as saying: "They came along and bought the property in August and immediately demanded I remove the taps," he said. "I was right in the middle of harvesting vegetables from the farm and couldn't drop everything and pull out the taps."
Popp said that ,he is “frustrated by what he described as "continual harassment" in the form of a steady stream of letters from the WHPO demanding the end of the sap harvest and a Department of Environmental Conservation officer stopping by his farm on Murray Hill Road making what Popp called "a courtesy visit." The DEC officer gave Popp 30 days to remove the equipment and Popp expects to have the taps removed before that deadline.”

When I looked at the property on November 15, it appeared completely empty .I spoke with Art Popp the next day, and he said that the camp had been vacant for a month or more, no signs of life whatsoever. The only recent appearance by WPHO was when four members arrived to nail No Trespassing signs on trees. (which seemed odd, considering the earlier objection to maple taps). Art confirmed a pattern I had observed in WPHO’s Amsterdam purchases. Properties are bought without any awareness of local codes, and end up unused.
When the group started work on a storage shed in August, Code Enforcement Officer David Rackmyre issued a stop work order, since a building permit had not been secured and the structure was beneath power lines. Even more significantly, as Art pointed out, the site is part of the Canajoharie watershed, and any further building would not be possible.
A few weeks ago, I discussed this incident with Jennie Wong and stressed that her people needed to be sensitive to the local culture here, and to act in ways that avoided conflict, rather than provoking it. She seemed to agree. 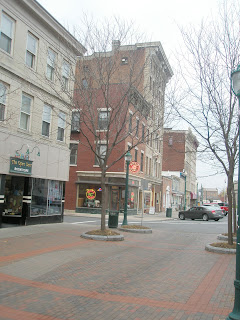 Pizza King restaurant, whose owner was arrested
for harassment of WPHO people on Nov. 14
The latest misunderstanding led to the arrest over the weekend of a local businessman from Schenectady for harassment at the former Jesuit Retreat House Auriesville . The details are unclear and when I went to see the man, who has run a successful restaurant for 20 years, he did not want to make a statement.
Hopefully, greater transparency on the part of the WPHO will do much to prevent such incidents in the future.
Update April 13, 2011