Philmont and its High Falls

On a beautiful morning in May we set out for High Falls Conservation Area, which is owned and managed by the Columbia Land Conservancy. We drove east from state route 9-h on SR 23, then took 217 into the old mill town of Philmont. Access to the area is from Roxbury Road near the Claverack Town garage. The village, once known as Factory Hill, was home to a flourishing knitting industry, powered by water power from the 150 foot High Falls.

Thanks to the Conservancy, there are three well-maintained trails. We took the Green Trail up a slight incline for about twenty minutes to reach an observation point opposite the Falls. 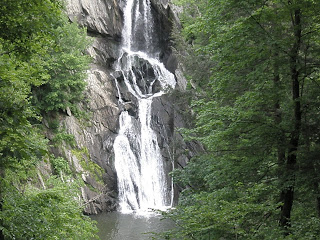 The High Falls from the Green Trail
We then followed the Blue Trail down to Agawamuck Creek, which is said to offer good opportunities trout and bass. We threw the line in a few times and saw many minnows but no larger fish. Along the creek we saw some trash, evidently thrown down from the hill on the village side, the most interesting of which was a circa 1968 Volkswagen Beetle. 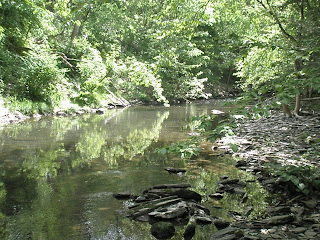 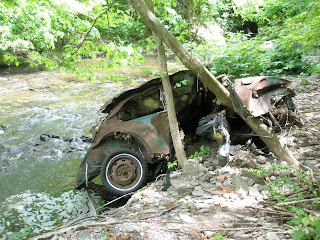 Relic of the 1960s
The blue trail ends in a jumble of rocks, over which it is necessary to climb in order to reach a truly magical place at the base of the Falls. Enclosed by high cliffs of shale is a round pool about a hundred feet in diameter. The pool looked inviting, but considering the slipperiness of the rocks, we resisted the temptation to jump in. 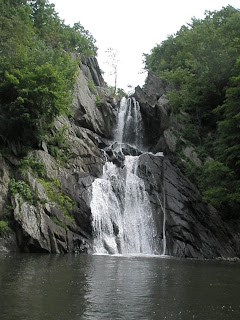 The High Falls from Below 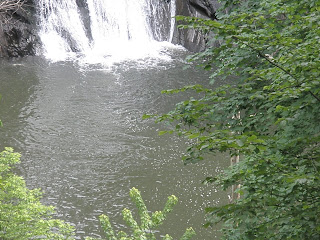 The Pool Below the Falls
The red trail has its own appeal, following a highland ridge through patches of ferns and woodland flowers. Coming back down the Blue Trail, we saw stone fences, evidence that farmers once struggled to wrest a living from this rocky soil. Doubtless, the unrewarding nature of agriculture in this region made factory work desirable when the first mills were built in Philmont. 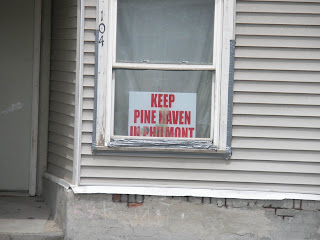 Community Activism in Philmont
The town is quite an active place, with many people on the street even on a weekday. Residents are currently united in a fight to keep Pinehaven, a public nursing and rehabilitation facility, from moving to Kinderhook about fifteen miles away. In an era when care of the aged and disabled has become one of the few reliable industries, opposition to the move is evident in a forest of signs on almost every lawn and shop window. The history of this institution, which began as a tuberculosis sanitarium, is an interesting one and well documented by local citizens. Some of the land on which it stands was purchased from George Harder, a descendant of the family that owned and ran the village’s largest employer for a century. 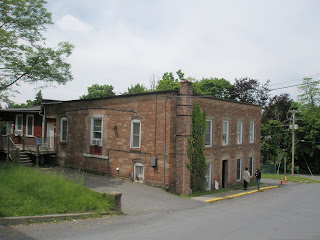 Last Remaining Building from High Rock Mills
The only remaining building from the High Rock Mill of the Harder family, according to Peter Stotts’ Looking for Work, is a small two story structure on Rock Street, now home to a daycare center. Originally the site for an earlier mill, built in 1845, the Harders acquired the property in 1868 and ran it until 1963. The mill reached its height in 1913, when it employed 870, a larger number than any other employer in the county. 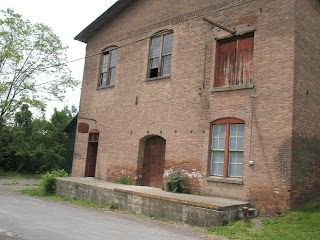 We then strolled a couple blocks to Canal Street, where one of the few remaining structures from the Aken Knitting Mill is still in use by Vita Nova Woodworking. Peter Stott reports that the Aken Mill, built around 1878, employed 250 persons, mostly women, in finishing the knit goods made in the company’s other mill on Main Street. The High Rock Company later bought the mill and used it for storage until was demolished in the 1940s. 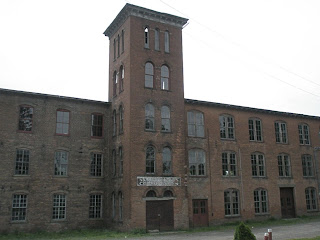 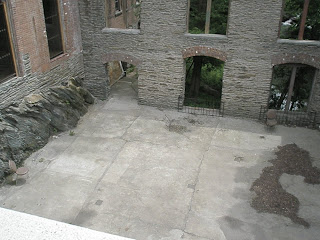 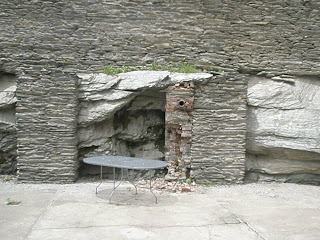 The Courtyard of the Summit Knitting Mill
Fortunately, the Summit Knitting Mill, the grandest of the old factories, is still standing and in good repair. Evidently the present owners are preparing it for new uses, and after some further research we will report on their progress and plans. There is a courtyard at the back of the mill, along the creek, which could be a very attractive outdoor space for a restaurant. The walls of the courtyard, probably part of a older mill structure, are composed of piled shale, which seems quite unusual, given the friable nature of that kind of stone. Even so, the walls appear quite sturdy.

The Summit Mill is built at the top of the High Falls and just below the dam which creates the very scenic Summit Lake in the village’s center. According to Peter Stott, this was the site for the village’s first textile mill in 1796 when George Philip dammed the creek and built a fulling mill. 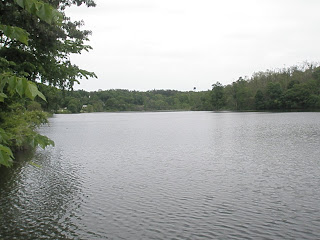 Summit Lake
We resolved to return soon to this beautiful village and get to know the lively people who still call it home. Perhaps in a time when our nation is struggling to overcome dependence on fossil fuels, the power of the High Falls will once again be a source of prosperity on the Agawamuck Creek.
Posted by Michael Cooney at 10:32 PM