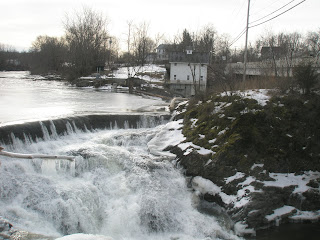 When the first Dutch settlers came to this corner of Columbia County in New York state around 1650, they took advantage of the ample water power to establish mills for the grinding of grain and production of lumber. In the early 1800s the industrial revolution initiated in New England came here when the English-born Nathan Wild built cotton mills on the Valatie and Kinderhook Creeks. Valatie became one of the first American factory towns, dominated by Wild's mills and the mansion that he built near the confluence of the Valatie and Kinderhook Creeks. These early mills and factories directly transferred the energy generated by falling water to looms and other machinery.

The unskilled work force was largely composed of young women drawn from the desperately poor farms and villages of New England and New York. The raw cotton was produced on plantations in the slave states and shipped north to towns like Valatie for processing into fabric. 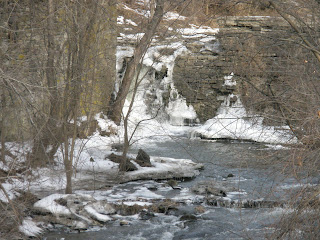 The dam on Valatie Creek

Near the ruins of an old mill is a dam on Valatie Creek where many potential kilowatts of power rush through a gap in the broken stonework. A close look at this dam suggests that it may have been built on an earlier Dutch structure. The lower levels, which have been exposed due to the effects of time and persistent tree roots, reveal unmortared and unshaped field stones which may date back to the first European presence. 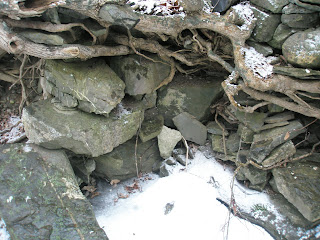 Unmortared field stones at base of Wild's dam may
go back to an earlier Dutch dam on the site.

The stone walls of an early mill can be found on the west bank of Valatie Creek adjacent to the dam. Presumably, this is one of Wild's first mills or at least its site. Edward Collier (1914) reports that William P. Rathbone built a wadding factory on the site of Wild's Valatie Creek mill in 1866, and this may be the Rathbone mill. 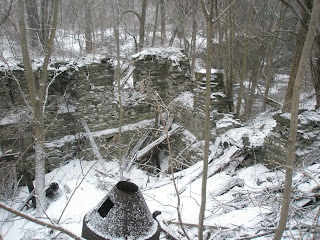 The ruins of a mill on west bank of Valatie Creek

According to Collier, author of A History of Old Kinderhook, Nathan Wild built the mill later known as the Beaver Mill on the site of a 1712 sawmill erected by Johannes Van Deusen. After a fire in 1851, this mill was rebuilt and enlarged, passing through several owners before it was destroyed by fire during the blizzard of 1888. The foundations are easily seen from the Beaver Cotton Mill Lookout. 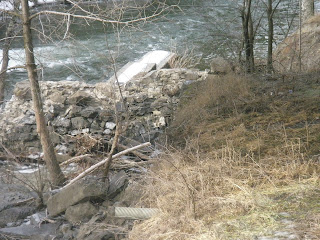 Ruins of the Beaver Cotton Mill, seen from
the overlook on route 203 in the center of Valatie.


A few hundred feet away the ruins of Wild's second mill lie beneath the Valatie Medical Arts building. Not surprisingly, health care is now the biggest employer in an aging region where so many once prosperous industries have closed down. 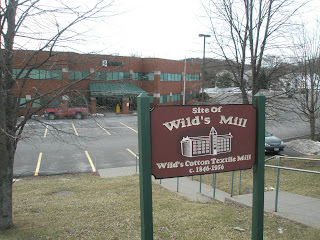 Although the mill has vanished, the housing that Wild built for his workers can be found on nearby River Street. The apartment-style building has long been vacant, and its interior shows signs of serious decay. 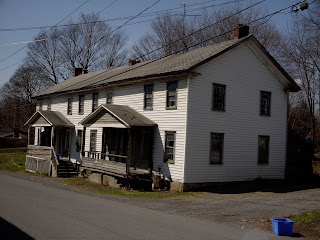 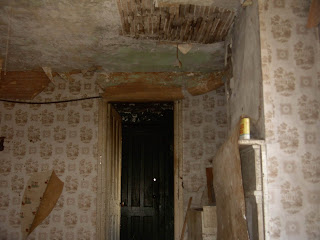 Also on River Street is Gimp Mill, the last knitting mill to be built in Valatie (1896) and also the last to close (1995) 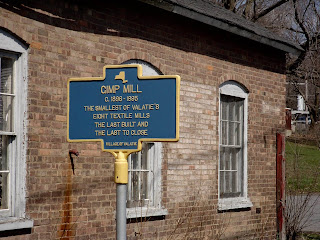 Happily, the old mill building is still in active use by Energy-Onix, Inc, a manufacturer of broadcast transmitters whose website boasts: 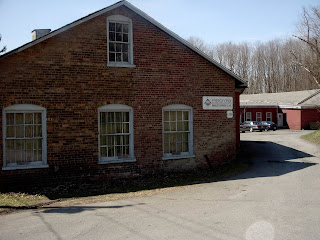 Since its founding in 1987 by Bernard Wise, Energy-Onix has provided over 750 AM, FM and Short-wave transmitters to broadcasters throughout the United States and the world. Energy-Onix transmitters are "On The Air" in Central and South America, Mexico, Iceland, Turkey, Africa, Greece, Australia, the Philippines, Korea and other international locations including 'Radio-7' - the first commercial radio station in Moscow, Russia. Energy-Onix's export activities have earned the Governor's Export Achievement Award (NY) and have been recognized by the U.S. Small Business Administration.

Two hundred years ago, waterpower led to the growth of manufacturing in such towns as Valatie. Many of these early industries switched to steam and later hydroelectric power before succumbing to the nationwide collapse of manufacturing over the past three or four decades. The renewable energy that could have kept this region self-sustaining indefinitely now flows untapped down our local streams, while we buy nearly all our manufactured goods from foreign countries.

The success of a company like Energy-Onix, Inc., however, is a hopeful sign that strong, innovative American companies can compete in a globalized economy.

According to ccScoop, Columbia County’s Home of the Web: “A group of residents and elected officials want to take “green” to the next level in the Town of Kinderhook, allowing residents and others to create their own electricity and share it with their neighbors. The Kinderhook Power Authority Task Force, which met for the first time in April, is working toward the goal of creating a district in the town that would be incorporated in a power authority district.”

This is certainly good news and offers the hope that the plentiful waterpower now rushing over the two falls in Valatie will be tapped in the foreseeable future.

Wasted waterpower at the broken dam in Valatie
Posted by Michael Cooney at 12:15 PM